Speaking to ‘Self Build & Improve Your Home’ magazine (link to magazine here– see page 130) RIAI Practice Director, Joe Miller, is quoted as saying that “while registered architects will continue to use the standard contract for their design services, the additional time and risk associated with signing off on the design could translate into additional costs. Indeed the RIAI is advising architects to use a separate appointment for the Design Certifier role (and if appointed as such, the Assigned Certifier role)” [emphasis by BRegs Blog]

Firms that are appointed corporately as the architects for a building project will need to name an individual from among their employees, in the separate appointments as Design Certifier and Assigned Certifier (if taking on these roles). For the professional this brings clarity to an issue that has caused much confusion since 1 March this year. This advice for a separate appointment (to that of the architect) coincides with similar advice issued recently by the Society of Chartered Surveyors Ireland on the same subject.

However it may not bring much clarity to building owners who now have to make at least five* separate appointments for a simple domestic extension or commercial fit-out. They must be wondering why an initiative intended to improve on-site standards in the construction industry has in reality just meant more and more paperwork and increased costs.

Jpeg of ‘Self Build & Improve Your Home’ magazine, p130 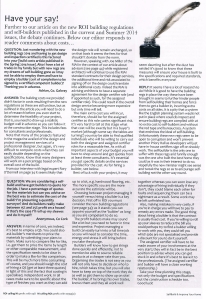 Design Certifier – Can we leave it to the builder to sort out?

Where is the Design Certifier in BC(A)R SI.9?