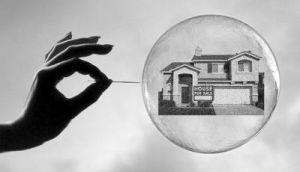 It would appear from recent media comment that some industry sources are trying to hype up a “construction housing boom”. Figures for 2014 released from the Department of the Environment (DECLG) confirm that housing completions remain at depressed levels. There are many factors affecting housing supply but the figures clearly indicate that one of the unintended consequences of the new building regulations introduced in March 2014 is additional “red-tape” costs and legal uncertainty which is further inhibiting new housing starts.

The following is a summary of residential completions from the DECLG. It lists monthly completions since 1975, from January to October 2014 inclusive. Data for November and December 2014, traditionally a low for completions, is unavailable at time of writing.

Based on the table below one can assume there will be approximately 10,500 houses completed in 2014, similar to the 2011 recession level.

8,796 housing units (houses and apartments) were completed for first 10 months of 2014. Although this figure exceeds the total for the previous year (8,300 dwelling units), it should be recalled that 2013 was the lowest ever residential completion total since records began in 1975. 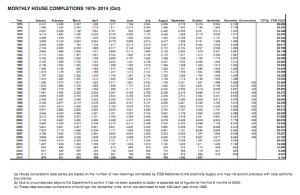 An initial analysis of information, available from the DECLG and other sources, suggest that NAMA and ‘ghost estate’ completions account for a significant amount of the increased supply in 2014. These are likely to be apartments already completed or part-completed and vacant for some time that only obtained ESB live connections this year (this is the criteria for the DECLG completion statistics).

The ESRI estimate 12,500 units will be required in 2015. Based on information available from the the BCMS Building Register, Commencements to December 2014 were still down 25% year on year directly following the implementation of the new Building Control system in March. The ESRI 2015 target may not be achieved with consequences for consumers, affordability of new housing and rental prices adding to the current housing crisis.

A review of the impact of the new building regulations is to take place shortly.