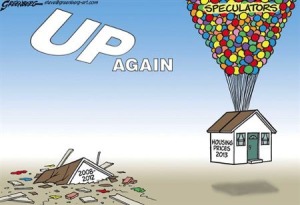 Recent media coverage surrounding a residential housing boom, particularly in Dublin, appears very wide of the mark when one examines the data available in closer detail. In a recent post it was noted that the total number of housing unit completions in the Republic of Ireland last year was approximately 10,500.  A breakdown of this figure by separate locations from data released by the Department of the Environment, Community and Local Government (DECLG) for the first ten months of 2014 is tabled below (figures for the last two months were not available at time of writing).

The table below indicates the total number of house completions for Dublin City for the first ten months of 2014 was 812 housing units. From this figure one can estimate, based on the average monthly completion rate, that the total for the nation’s capital for the year will be less than 1,000 residential units. 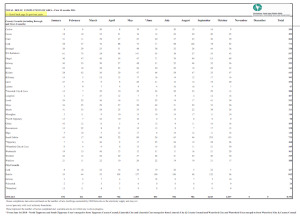 Table: House Completions per month (by County and City)

The greater Dublin region (DunLaoghaire/Rathdown, Fingal, Dublin City, South Dublin County Council) saw just 2,724 housing units completed in the first 10 months of 2014. Housing unit completions in Dublin City have increased from the previous year. However it is unclear how much of this increase is due to recent ESB connections to units which were built during the boom and have been unoccupied for some time.

With lead-in times of between 18-22 months for residential developments, the current supply issues and related rent increases are set to continue well into 2016.

Many commentators have noted that technical difficulties with the completion of multi-unit developments due to the recently introduced SI.9 Building Control Regulations have also added significantly to costs, affecting the feasibility of many housing schemes despite recent rapid increases in house prices.

There are many other contributing factors, in addition to SI. 9, including the credit squeeze, shortage of serviced land etc.. Given the multitude of problems, it might make sense for the Government to review all factors including SI.9 and see how to mitigate these, especially in cities. Fixing self-build will not fix the housing crisis in Dublin. Otherwise the housing shortage is set to remain a media headline until well past the next election.

What sane person wants to see house prices back to where they were a few years ago?

Recent moves by the Central Bank may mitigate the rate of inflation in house prices but continued reduced housing supply will add to the current rate of rent increases in Dublin, in particular. This leads in turn to increasing the cost of living, reducing competitiveness and also adding to the rapidly deteriorating problem of homelessness in the capital.