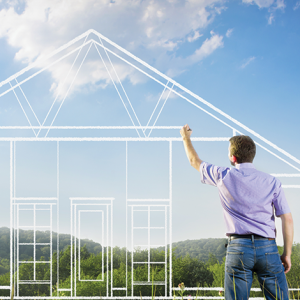 The Irish Association of Self-builders (IAOSB) conducted a survey of its members in 2014 and found that one third of self-build projects including one-off houses and extensions had either been abandoned or postponed. This figure could represent almost a quarter of the total for house building in Ireland. We reproduce below an interview Shane McCloud, of the IAOSB,  gave recently on this issue outlining some of the reasons for this collapse in self-build housing figures.

1) What is your own background, are you a self builder, where are you from and when did you set up the Irish Association of Self Builders website?

I have built three houses here as a self builder on direct labour and project management route. Before that, I was a Civil Engineer graduated in USA and have previous experience in this field in the UK. Irish Association of Self Builder was officially launched on 1st of January 2004 and has constantly been ranked number one with all major search engines for “Building a house in Ireland” or similar phrases. Iaosb.com was never started as a business and the aim has always been to help and assist new self builders to understand the whole process from start to finish. The whole operation of the website is run by a team of volunteer self builders who have gone through the experience themselves and want to help others going through the process now.

2)  Did you get any response from Minister Alan Kelly following your letter calling for changes to the building regulations?

We have written to Minister Alan Kelly twice and have received no replies. Recent comments from Minister Alan Kelly mentioned amending SI9 to reduce impacts on self builders. The RIAI at an EGM on 4th November mentioned that they had been tasked with “sorting out” the self-builders. R.I.A.I President said at his meeting with Alan Kelly in early September he was asked for help in resolving the self-build problems under the regulations. We don’t know if the RIAI have proposed technical solutions to the minister in the last 3 months. The RIAI president raised this issue on SixOne in February when Phil Hogan was the Minister and nothing was ever done about it.

3)  Can you provide details of the survey you did, which found that  1/3 of all self-builds this year have either been postponed or abandoned and could have led to up to 1,000 houses not being built? Was it an online survey?

Out of a representative sample canvassed  we had 40% replies. Based on membership profiles, we believe 30 % of self-builders in 2014 have been postponed or abandoned. The breakdown of respondents were as follows:

We believe Bank lending has become much tighter this year , borrowing extra for more  ‘consultancy fees’ is very difficult.

We believe out of 8,300 completed housing units in 2013 around 1,300 were developer built housing units (CSO source). This means that 85% of the new homes built in Ireland in the last few years were ‘custom build’ or ‘self build’??

4) Is the problem right across the country, or is it more prevalent in rural areas?

Our membership is diverse and most individual self-builds are rural. However a significant proportion of members undertake significant extensions and alterations managing projects themselves. Direct labour is not limited to house building. Lots of small businesses in retail, hospitality, tourism and services sector do work through direct labour.

5) Has the association had a meeting with the Department of the Environment on this issue and what was the outcome?

We have had no meeting with DECLG on this issue . We found out that Minister Hogan stated in a Seanad debate that he consulted with the IAOSB but this is incorrect (Link to Seanad speech). We have also noted the transcript of this debate has been altered to remove this factually incorrect statement. Senator Paschal Mooney has requested more information on this. Self Builders would welcome a meeting to propose solutions.

6) Have you been contacted by people complaining about the fees they are being quoted for having their self-build signed off under the new building regulations, and can you give any examples?

Yes many members have contacted us. One you could talk to is Amanda Gallagher. An RIAI architect (with a quantity surveyor) self-has completed a detailed breakdown of additional costs for SI.9 due to increased professional fees and increased costs to use a main contractor registered for a typical 1,350 4 bed detached house in suburban Dublin- see link here [SI9 costs for a typical dwelling]

The problem is that the regulations are very demanding- it’s understandable that someone won’t risk their own livelihood- if the regulations were clearer the cost would drop. The following is an extract from a member asking for help this morning:

“ To put into perspective I have received three quotations of €4,500, €12,000 and €32,000 all exc VAT for work. This has scared me immensely. I am open to admitting I know nothing about construction but I have two builders both of whom I trust having witnessed them build homes for my friends and family over the past 15 years. Either will do a great job for me with my families best interests at heart. I cannot engage either of them until I have a certifier picked who will need to re-draw my plans to meet their needs and start this process but how can I tell which is the right one to go with especially when each are saying ‘we are all learning about this process and trying to get our heads around it’. Am I really to pay up to €40,000 for something that my neighbour who started work in February (one month before the new regulation launched) is not having to do at all?”

The quotations are based on the work being done by a Building Contractor.

7) I’ve seen the statistic that 60 per cent of houses are self-builds- is this an old statistic because it seems very high?

It varies between 40- 60%. This excludes extensions many of which are self-built. Based on CSO figures for 2013, 8300 dwelling units (including apartments) were built in the year. Approximately 3,000 were once-off houses. Only 1,300 units were registered with house-building guarantee schemes (speculative WITH HOMEBOND) so the bulk of dwellings built were either commissioned or built by individuals rather than house building companies.

Private individuals and businesses with no experience commission buildings and extensions all the time- that’s normal in every country, it doesn’t mean shoddy work. Cowboys are more likely in speculative building where cutting corners can bring big profits,

A quick look at sites like link2plans (we think they may overestimate the number slightly) and the BCMS website (Department site where new commencements are recorder) to verify the extent.

In the UK self-building is very big, and the UK recently have launched a co-housing initiative, to supply low-cost sites to self-builders and decided that there’ll be no development levies for self-build. UK government see self-building this as a big part of solution to the housing crisis- sustainable well built homes, no cost or risk to tax payer.

8) Are the new building regulations having any impact on extensions (from the building regs forum, it seems that extensions under 40sqm are not affected)?

Apparently the Department have recently come back to recommend that many extensions previously under 40sqm that were considered exempt are no longer. The advice is very confusing and we believe the RIAI have written to the department to clarify. It is remarkable that professional architects currently are uncertain and in the dark as to whether extensions under 40Sqm are exempt or not. The BRegs Blog has written extensively on this. In the meantime many small extensions aren’t viable as the cost for inspections is more than the build.

If you need links to any of the statics or sites/ topics listed I can provide them for you.

As you can see from the attached Department of the Environment information there is little to suggest a  housing boom.

Bruce Shaw Annual Review for information on costs, trends and the construction industry:

All our information are gathered by a self-build research team and if you have any further technical queries please do not hesitate to let us know and our team will endeavour to answer all your questions.

Self build: How to make your dream home come true

What is Cohousing? | Homebuilding & Renovating