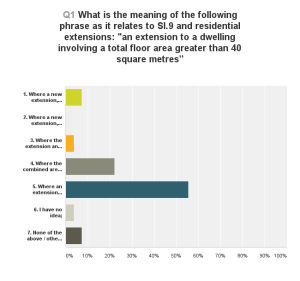 The BRegs Blog had its largest ever response from readers to the 40 sq.m. series of posts last week. We publish a selection of those comments received below and links to the previous posts. As part of the series we asked for readers’ interpretations of the SI.9 wording in relation to domestic extensions and the results may be seen in the graph above. 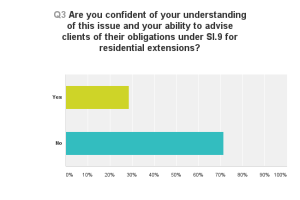 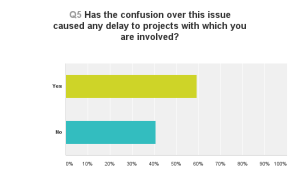 Worryingly over 70% of you are not confident of your understanding on the issue and 60% indicated that the confusion on the floor area interpretation for extensions is causing delays to building projects. As the final comment below puts it so eloquently: “it is now time for the stakeholders to finally get off the fence and Defend, Mend or call for an End to SI. 9”

Links to previous posts on this issue:

O’Cofaigh | Applicability of PROVISIONS OF S.I.9 of 2014 to house extensions