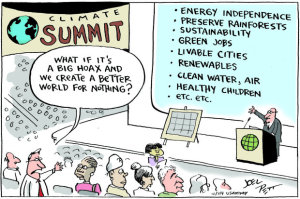 Many industry observers were surprised at councillors in DunLaoghaire-Rathdown (DLR) County Council jumping the gun and voting that all new housing adopt the rigorous “Passive House” standard (see link here) as part of a proposed amendment to their draft Development Plan; this is considered to be the prerogative of the Department of the Environment, Community and Local Government (DECLG). Less surprising was the rush to condemn the proposal by the Construction Industry Federation who always appear to resist any increase in building standards in order to minimise costs of construction to its members. The issue signals the potential for 34 different Building Codes developing across Ireland.

In fairness to the DLR councillors, the DECLG and the professional organisations have been dragging their feet on any energy initiatives to date.

“Buildings are responsible for approximately 40% of energy consumption and some 36% of the European Union’s carbon dioxide (CO2) emissions. Within the buildings sector, improvements in energy efficiency in tandem with the increased use of renewable energy technologies constitute important policy measures“

“In addition to the recent regulations in respect of dwellings, in 2012, DECLG will be commencing a review of Part L in relation to buildings other than dwellings. .. It is anticipated that the proposed review will be completed and new regulations/technical guidance published by end 2013. ”

This review has not happened as confirmed at the Irish Building Control Institute conference in April 2014 (see PDF Building Regulations update Eamonn Smyth). Now in 2015 we are still on Part L (other than dwellings) from 2008. Yet- “Further review of Part L needed to achieve nZEB (Near Zero Energy Buildings) by 2018”. Extract: 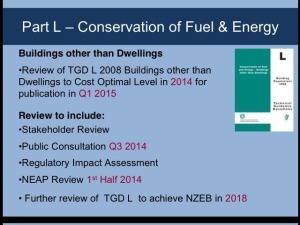 We appear to be stuck on a 2008 standard and need to make the leap to nZEB buildings by 2018? To get to near zero energy building standards from where we are today is a huge leap.

It’ll be a big ask to get the industry- designers and builders, ready for this.

Upskilling of construction workforce crucial to achieve a compliance culture.