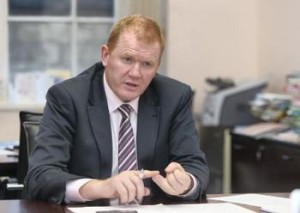 Building regulation fees for once-off housing were the topic of a Dáil debate on February 25th 2015 between Patrick O’Donovan T.D. (FG) and Minister for State Paudie Coffey.

“In my opinion, based on the advice I am receiving, the inspection regime for one-off houses should cost no more than €3,500. However, I am aware of many cases where the cost of inspections has far exceeded this amount, something I am determined to address in as far as possible” (Minister Coffey)

Subsequently Minister Coffey has clarified to BRegs Blog that his Dáil statement does not mean that Assigned Certifier fees will be capped at €3,500. In a Twitter exchange with the Minister, he made clear that “there is no mention of a cap” and that “detail (is) to be announced all in due course…. caps were never mentioned”

There has been on-going controversy since former Minister Phil Hogan suggested that the onerous obligations and inspection regime required under SI9 could be carried out for €1,000-3,000.

The Minister’s attempt to address costs is the latest response to address the spiralling cost of SI.9 introduced last March. Additional costs for fees and administration costs have been widely recorded from €22,000 up to over €40,000 for a typical once- off house.

Alarmingly, the additional costs for non-residential projects have not been given the same attention. In government projects such as schools and hospitals, fees for Assigned and Design Certifiers, together with Ancillary Certifiers (Engineers) have resulted in an increase of around 3% to all construction, depending on project size. These fees exclude additional testing and certification charges costs and more importantly defensive specifications, which add an up to 5% on top of the capital cost for projects. Additional professional fees reported to the BRegs Blog for school projects have ranged up to €100,000 for typical €3m school builds (see previous post below).

Commentators have been very critical of the new regulations applied to non-residential projects under Government control. Many consider that larger projects already have full design teams appointed and significant paperwork already in place (as built drawings, O+M manuals etc) and SI.9 introduces a costly duplicate administrative process, for little benefit.

The additional administrative cost for the €3.5Bn capital works programme in 2015 could conservatively stretch to tens of millions, many multiples of the cost to run a properly resourced independent Local Authority inspection system.