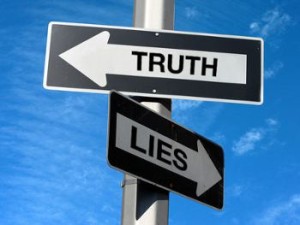 A revealing analysis of 2014 planning permission data from the Central Statics Office (CSO) has been posted by Constantin Gurdgiev on his “True Economics” blog on March 26th 2015. This reinforces the public perception that the Government and media have grossly exaggerated the extent of the construction recovery. The CSO data confirms a curent shortfall in planning permissions for dwellings at over 82,000, and Mr Gurdgiev notes that this “… is, put simply, catastrophic and is only increasing, given the current trends to-date.”

He says “2014 was the worst year on record for the construction permissions activity measured by the total floor area of approvals, with overall square meterage of new permissions approved falling to an absolute historical low.”

The continued massive shortfall in planning permissions (CSO figures particularly for residential), 25% lower construction starts and 60% drop in once-off housing in the past 12 months since March 2015 (confirmed recently in the Dáil), combined with increasing construction margins may create a prolonged period of low supply, increasing prices and sluggish growth. As most construction projects take a minimum of 24 months to get from drawing board to completion, this analysis suggests that the current housing crisis will continue well past the next election and into the medium term and continue to drive rental costs upwards.

“CSO published Q4 2014 figures for Planning Permissions in Ireland, confirming the trend toward de-acceleration in the already weak data.

Here are the details. 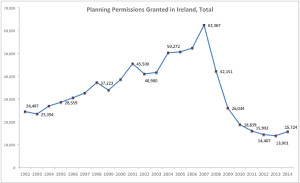 Key point: given the absurdly low levels of activity in 2013, growth in 2014 is far from impressive. The bottlenecks created in 2010-2014, amounting to cumulative shortfall in planning permissions of 108,820 permissions relative to 1997-2001 average, and for dwellings this shortfall is 82,309 permissions. This shortfall is, put simply, catastrophic and is only increasing, given the current trends to-date. 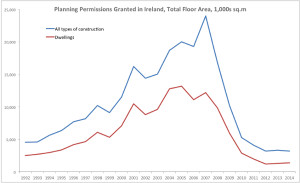 Key points: 2014 was the worst year on record for the construction permissions activity measured by the total floor area of approvals, with overall square meterage of new permissions approved falling to an absolute historical low. 2014 was the third worst year on record for square meterage approvals for new dwellings construction and the absolute historical low for non-dwellings activity.

Summary of on-peak changes and historical shortfalls below:

Overall, 2014 data on planning permissions suggests little real improvement in the investment pipeline relating to construction sector. This evidence does not support the National Accounts tale of revival in domestic real estate investment and investment in general. According to the National Accounts, building & construction sector activity and Gross Fixed Capital Formation have both been running in excess of 2011 levels in both 2013 and 2014. Yet, there is no corresponding performance in planning permissions terms. This strongly suggests that current construction sector activity relates predominantly to past permissions pipeline, implying downside risk to the sector in the near future; and that our real estate investment ‘boom’ is driven predominantly by the re-sale markets (flipping of existent capacity, rather than creating new capital stock additions).”