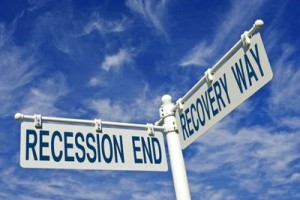 The following four press articles on lack of housing supply, current limited review into the building regulations, lack of progress for pyrite remediation and calls for a public inquiry into the Newbridge house fires are of note this week. The following snapshot of media coverage suggests we have some way to go before our construction industry gets past problems that have dogged the sector for the past number of years and onto a sustained path of revcovery. Click on each title to read original article: 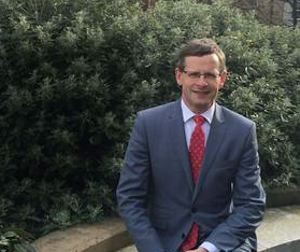 Hubert Fitzparticy, CIF: “”It will probably take another year before some western and northern parts of Dublin, as well as many parts of Cork and Limerick cities, reach the threshold that makes homes viable to build,” he says.

He is also keen to assert that because of this we must initially ensure development land is available in those areas where house building is actually financially viable.

“People forget that many key construction costs have risen. Outside of greater Dublin, second-hand house prices are currently running as low as 50pc of what it costs to build them.

…Of course, increased costs, including materials, have played a role but so too have upgraded building regulations that have improved the standard of new Irish housing immeasurably. But many forget that these improvements have also added to the overall cost of construction.

Another factor he talks about which has kept costs high, has been the tendency of Irish local authorities, particularly in Dublin, to stick with ‘pre-bust’ levels of levies for services.

…Government research shows that out of permissions granted for 31,000 units, about 21,000 of them are for apartments.”

But we’ve a long way to go when 11,000 homes were constructed nationwide last year while it is estimated Dublin alone needs three times that. 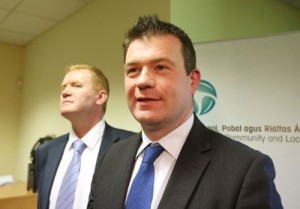 “Minister for the Environment Alan Kelly has ordered a review of the building regulations because of what he said were “outlandish charges” being sought for inspections required under the new system….Mr Kelly is considering allowing builders of one-off houses to “opt out” of the certification requirements.

Mr Kelly said the “cost burden”, particularly for those building their own homes, had become a cause for concern.

“A number of cases have been brought to my attention and my colleague Minister Coffey whereby consumers have been quoted outlandish charges for professional services in relation to residential construction projects.” 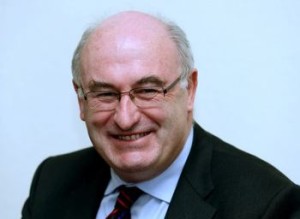 “FIANNA FÁIL HAS hit out at the Government’s pyrite remediation scheme after new figures revealed work has been completed on only five homes.

It allows homeowners whose property has been affected by ‘pyrite heave’ – where the sub-standard building material has caused structural damage – to apply to have the problem repaired.

According to figures released to Fianna Fáil in a parliamentary question:

630 applications have been received.

300 homes were approved for inclusion in the scheme.

(Note: see earlier BReg Blog post from February on this topic here:  ‘The Money Pit’ | 5 pyrite homes re-mediated at a cost of €2.2m.) 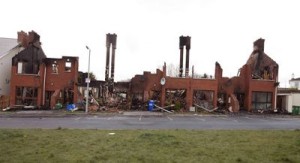 THE photographs speak volumes. Two back-to-back chimney stacks were all that remained free-standing from a terrace of six hours following a fire in Newbridge, Co Kildare on Tuesday.

What happened to the walls?

Ordinarily, there is no way that the fire should have been capable of spreading so fast and, ultimately, completely destroying six homes. One explanation for the speed at which the fire spread has been the high winds at the time, but sources in the fire prevention business are very sceptical that winds could be the underlying cause.

Kildare County Council has launched an investigation into the incident. A key feature of that investigation will have to be the speed at which the fire spread. One possible explanation that will have to be examined is whether or not the walls separating the houses were built as per design.

One way or another, the investigation will have to determine how the walls could effectively have caught fire like paper. There may well be an explanation other than a fault in construction, and if one is uncovered it will provide fascinating and valuable material for fire engineers and architects.

Millfield Manor was competed in 2006 at the height of the building boom. It was built by a company called Barrack Construction, the main shareholder of which was a Kildare native by the name of Paddy Byrne.

The company was formed in April 2001 but, in common with many other construction companies, it did not survive the downturn and went into receivership in May 2012.

…New owners made a number of complaints about unfinished elements of the estate. In 2011, the estate appeared in a newspaper feature on the plight of residents in half-finished ghost estates.

This is process of self-certification has come under major scrutiny since the evacuation of Priory Hall in North Dublin over fire safety concerns in 2011.

In a similar vein, the Irish Examiner reported in February about the shortcomings in fire walls that were part of the Longboat Quay development in the Dublin docklands.

Longboat Quay was completed in 2004. The extent of the problems in that development are now the subject of a major survey, after which extensive remedial work is expected to take place.

Another development in Dublin where major fire safety deficiencies were found recently is the Prospect Hill complex in Tolka Valley in the north of the city. Remedial work is also underway there. Apartments were built there in 2004 and, like the developer in Longboat Quay, the Prospect Hill developer has since gone into receivership.

If any fire safety deficit were to be uncovered in the Newbridge probe, it would be incumbent on investigators to examine why a fire safety certificate was signed off on.

Resources in local authorities for fire safety are a major problem right across the State.”

1 thought on “Here we go again…house building in crisis”