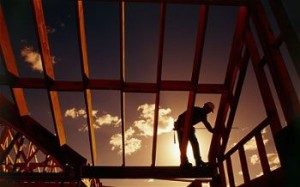 Purchasing Managers Index (PMI) is an indicator of the economic health of a sector. The PMI index is based on five major indicators: new orders, inventory levels, production, supplier deliveries and the employment environment (read more here).

Further softening in construction sector activity has been flagged by Constantin Gurdgiev, in his blog “True Economics”. He has posted a composite PMI snapshot based on 3 core sectors: Manufacturing, Construction and Services. For full post click here:

For the construction sector he says:

Yearly growth rates are falling off the cliff too: in Q3 2014 Construction PMI rose 21.3% y/y, which declined to 8.5% growth in Q4 2014 and to estimated -5.3% contraction in Q1 2015. Again, as with Manufacturing, we do have continued 7 quarters of above 50 readings in the series, so the slowdown is in the rate of growth, not an outright contraction in activity.”[emphasis by BReg Blog] 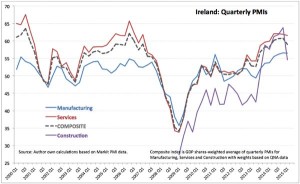 “As the chart above shows, Composite Index (computed by myself based on sectoral weights in the National Accounts) has posted a relatively sharp decline, driven primarily by the Construction PMI reading. As of today (absent March data for Construction PMI) the composite indicator is reading at 59.0, down from 60.7 in Q4 2014.