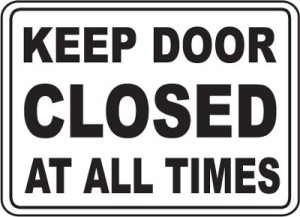 Today’s Irish Examiner explains how journalist Michael Clifford submitted a request to attend the BC(A)R Annual review meeting scheduled for this afternoon but was declined. He notes that new building regulations are “… fraught with conflicts of interest and as such looks just like boom-time self-regulation by another name“.

For full story see “Are shoddy building practices consigned to the boom’s rubble?“

With regard to today’s meeting he notes “What exactly will be discussed and agreed we don’t know, because despite the protection of consumers being the impetus for new regulations, no real representatives for consumer interests will be there. Neither will the media. A request from this reporter to attend was turned down.”

Alarmingly, others have been declined access also, and no minutes will be kept of the meeting:

“Neither will there be independent views from within the industry. The Irish Examiner understands that at least two individuals who have long records in the industry, and consider themselves independent, were denied access. No minutes will be kept of the gathering, although a report will be compiled and forwarded to Mr Coffey.”

“Submissions will be accepted at a later stage of the process, but today’s closed gathering suggests that it might all be a done deal by that stage. The only representatives at the gathering which might have consumer interests at the forefront, are those from the building control sections of local authorities. However, voices from that quarter are highly unlikely to dominate in a gathering top-heavy with vested interests.”

“What is very unlikely to be discussed at all is the elephant in the room, indicating that this brave new world of assigned certification is, to a large extent, self-regulation by another name.“[emphasis by Bregs Blog]

“The independence of these certifiers is highly questionable. For instance, a developer can employ an assigned certifier. Where lies that conflict of interest? Nominally, the certifier is supposed to be operating in the public interest, and that of the law. If he or she encounters shoddy work, and the employer disputes the certifier’s analysis, who wins out? Who is buttering the certifier’s bread?”

He goes on to ask the question: who polices the system?

“The architects, engineers and surveyors who qualify as certifiers are answerable only to their respective professional bodies, which act as both regulator and representative for their members. More blatant conflicts of interest.”

“In the UK, they do things differently. The certification is undertaken by building control inspectors for local authorities. This eliminates conflicts of interest. Alternatively, there is also a system of independent certifiers, but, crucially, they operate under a register controlled by the local authority. Again, here, the certifier knows who the boss is, and to whom he or she is answerable.”

“To go down that route would mean the State taking a more direct interest in the construction process, to ensure that its citizens lives and well-being are protected. That hands-on approach would shift power from vested interests to the State, and require greater effort from state bodies, although not necessarily any extra financial cost to the exchequer. But the downside, for political figures in particular, is that it might mean more hassle. And why bring any hassle on yourself, when the alternative of taking a punt that the industry might police itself is far more palatable.”

List of “stakeholders” who will be represented at today’s forum (source DECLG):

Is Irish Building Control a threat to Foreign Direct Investment?

Lobbying in the Construction Industry – Part 1