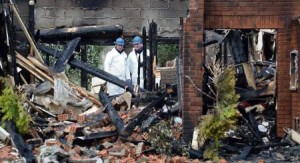 The article ‘Trapped in smouldering housing boom rubble‘ was published in the Irish Examiner on May 13th 2015. Author Michael Clifford….”poses questions after six houses in a boom-time estate were razed in a fire in 20 minutes despite standards stating a fire should take an hour to spread from each house“.

Widely believed to be the tip of the iceberg, recent high-profile building failures such as the potentially deadly fire in Newbridge (discussed in the article) confirm that the country faces into years of remedial work to potentially thousands of defective buildings constructed during Ireland’s ‘celtic tiger’ years.

THE fallout from a devastating fire in a Newbridge housing estate is raising concerns about fire safety and legacy issues from the building boom on a whole series of levels.

In the first instance, up to 90 homeowners in the Millford Manor estate have been placed in an unenviable position. They have been told their homes are possibly fire traps, but it’s up to them to have that confirmed or discounted, and to sort out remedial work themselves.

A fire in the estate on March 31 burnt to the ground six houses in a little over 20 minutes. Fire design standards allow for one hour before fire should spread from one house to another. In this instance, it should have been at least three hours before one of the houses at the extremity of the fire was engulfed. Luckily, there were no fatalities, but if such a fire were to occur in the middle of the night, for instance, the outcome could be catastrophic.

Following the fire, Kildare County Council commissioned an inspection on 10 unoccupied houses in the estate and found major deficiencies. In particular, the party walls — which separate the houses — were not built to specifications, thus ensuring that any spread of fire would be more rapid than allowed for. Crucially, the party walls were not built right to the underside of the roof, thus depriving the building of a vital delaying mechanism in the case of fire. These issues would be serious in any scenario, but the houses in Millford Manor were built using timber-frame construction, which exacerbates the dangers.

While this statement can be taken at face value, it is clear there were deficiencies in both the destroyed houses and the 10 inspected for the report. What’s the chances that all of the others, which were built by the same now-defunct company, Barrack Construction, are any different?

At a meeting last week, an official read out the report to a group of resident representatives and agreed to furnish the representatives with a copy. A request for a copy by three councillors who were present was refused. Effectively, the council is leaving it up to the residents to do what they will with the report. Residents and owners can have their homes inspected, and pay for any remedial work that might be required. The type of deficiencies identified in the report would require residents to leave the houses while remedial work is undertaken.

What if one homeowner on a terrace wants to have an inspection and carry out any work necessary in order to ensure his or her safety, and their neighbour hasn’t either the will or the money to do so? That is one of the many problems that the residents of Millford Manor now face.

Independent councillor Willie Crowley has said he does not apportion blame to the council, which has its hands tied by legislation.

“But I feel this matter is being shuffled aside because of the macro issues it raises,” he said. “It now requires intervention at government level. If these householders have to take measures to secure the safety of houses they bought in good faith, someone will have to provide the money to accommodate them while work is being undertaken and someone will have to pay to address and make good the deficiencies which were signed off on.”

There are, however, other issues for the council. Was a commencement notice signed off by the council when the estate was built in 2006? If so, did anybody in the council notice that this was to be a timber-frame construction, which may have required greater vigilance? Were the houses ever inspected, either during construction or on completion? Since the estate was built, there have been legacy construction and fire safety problems in apartment blocks which form part of Millford Manor. Did that shoddy work not alert anybody in Kildare County Council there could be problems here?

There are issues over how the State deals with fire safety. Multi-occupancy buildings, such as apartment blocks, require a fire safety certificate. The local authority has both the power and responsibility to evacuate such buildings, under Section 20 of the Fire Services Act, if the building is deemed unsafe — which is precisely what happened in Priory Hall, which was evacuated in 2011.

But in single occupancy buildings, such as houses, that act does not apply. The local authority has neither power nor responsibility for fire safety in houses. So in Milford Manor, there now exists a situation where any discovery of fire safety issues in the apartment complex is a matter for the council, while anything in the houses has nothing to do with the state body. This, despite the evidence in the fire on March 31, that the spread of fire from one house to another was potentially deadly and rapid.

There is a much greater issue lurking in the travails of Millford Manor. Not for the first time, it raises questions about the safety and suitability of timber-frame construction. During the building boom, timber-frame construction grew in popularity in this country. It is easy, clean, and quick. Most of it is prefabricated, which cuts down on costs. And at a time when houses were being thrown up, it was a route to turning a buck quicker than the next developer.

For years, some architects and engineers have expressed concerns about the design and testing of timber-frame houses in this country. Installing prefabricated units requires that the installation must be done to a high degree of accuracy. One thing that has emerged from the embers of the building boom is that expediency trumped any fidelity to high design. As one architect put it to the Irish Examiner: “We’re not great in this country at installing that kind of thing to a high degree of specification at the best of times, and the Celtic Tiger was not the best of times.”

In such a milieu, the only fallback is that the inspection process would ensure that some proper standards were applied. As we now know, there was no inspection worth writing about. As with the financial world, light regulation was the order of the day. Despite a new system brought in a year ago, little in practical terms has changed.

The known victims of the building practices are those in Milford Manor, Priory Hall, and other developments where investigation years after construction has discovered dangerous or extremely shoddy work. So far, we have been spared tragedy. In the absence of any system to properly service and protect citizens, all we’re left with is hope that no tragedy occurs in future.

1 thought on “‘So far, we have been spared tragedy”- the legacy of boom-time housing | Michael Clifford”