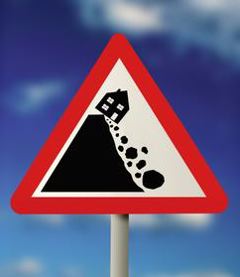 Nationally there were only 2,629 completions in Q1. Based on this data 2015 may be worse for residential completions than 2014 when only 11,016 homes were completed.

Industry commentators agree that to achieve a sustainable balanced rental and sales market levels need to be considerably higher.

Tom Moloney, CIS: “The overall requirement for housing is 20,000 a year, but it is not physically possible for the industry to build that much every year. In the Dublin area alone, there is an immediate need for 6,000 houses. Realistically, the industry will probably manage to build a total of 9,000 houses a year up to 2018, as estimated by the CIF,” (see full article here).

“In Ireland over the next decade we probably need to build around 25,000 more dwellings a year. As new housing supply is currently falling well short of that, there is continuing upward pressure on rents and prices. [emphasis by Breg Bog].

This is creating difficulties for renters and would-be buyers, particularly those on limited incomes. The long-term solution to a shortfall in supply is to build more homes, and where people want them – in our major cities.

…Whoever pays most for any housing becoming available will have first call on it, whether that is individuals trying to buy or rent a home, or the State trying to house people who are homeless. So the pressure of demand on a virtually fixed supply will push up rents.”

“Rents were found to have increased by 9.7% in the final quarter of 2014 when compared to the same period the year before…

For supply to be met in Dublin an additional 8,500 new properties need to be built every year.[emphasis by BReg Blog]

Dublin’s population is growing at a rate of 10,000 households a year while its stock of housing is increasing by only 1,500 units a year.”

“The pressure-cooker situation building in the capital around rising rentals and a limited supply of houses is likely to push buyers out to the regions, and 2015 may be the year when the commuter-belt counties of Kildare, Meath and Wicklow see real growth. Lowe envisages areas of Dublin that have recovered more slowly than others, such as west and north Dublin, will see stronger growth as a result of price inflation in more prime areas.

…With just 8,700 new homes built in 2014 the National Housing Agency says that an average of 16,000 new homes will be required each year for the next four years. [emphasis by BReg Blog]”

It looks like Dublin will have another year of escalating rents with only 30% of current demand for new homes being achieved in 2015.