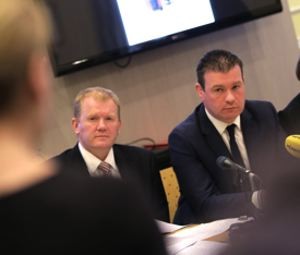 County Councillors in DunLaoghaire-Rathdown and Fingal have tweeted the following letter sent to Local Authorities signed by Ministers Alan Kelly and Paudie Coffey on 10th June 2015. The letter notes the Ministers’ reluctance to adopt improved standards such as the “passive house” standard proposed in new development plans. 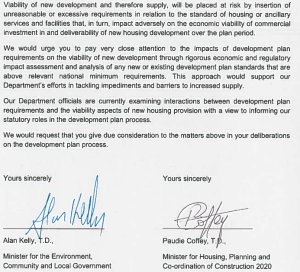 “Viability of new development and therefore supply, will be placed at risk by insertion of unreasonable or excessive requirements in relation to the standard of housing or ancillary services and facilities that, in turn, impact adversely on the economic viability of commercial investment and deliverability of new housing development over the plan period.

We would urge you to pay very close attention to the impacts of development plan requirements on the viability of new development through rigourous ecomomic and regulatory impact assessment and analysis of any new or existing development plan standards that are above national minimum requirements. This approach would support our Department’s effors in tackling impediments and barriers to increased supply…

Recently the Irish Times reported that both Nama and the Construction Industry Federation (CIF) similarly had objected to plans by Dún Laoghaire Rathdown County Council to make the passive house standard mandatory for all new buildings under the Local Authority’s latest development plan, which is due to come into force next year (see article to follow). Passive House is an international standard for energy efficient homes that cost almost nothing to heat. (see report on Wexford development here).

The Construction Industry Federation (CIF) have consistently argued for relxation of building and planning standards to reduce costs and increase afforability of new build residential developments. However this recent Ministers’ letter leaves some commentators wondering if the CIF, NAMA and now both Ministers of the Environment and State are “on the same page”. The “stack ’em high, sell ’em cheap” approach has resulted in recent high-profile building failures such as Riverbank in Ratoath, Millbank Manor, Longboat Quay, Priory Hall and earlier Shangan Hall during the boom.

The joint stance on the issue of minimum building standards is perhaps indicative as to the strength of the CIF lobby in Government policy-making. Tom Parlon, Construction Industry Federation Director General is a former Fine Gael Minister for State.

“Nama has objected to the inclusion of a requirement for “passive house”, energy efficient homes and commercial buildings being written into the Dun Laoghaire – Rathdown County Development Plan…in a submission on the Dun Laoghaire – Rathdown Draft County Development Plan 2016-2022, Nama said energy requirements for new buildings “should come from national standards and should be removed from the county plan”.

…Separately the Construction Industry Federation warned increased costs associated with passive houses would mean “very few” new homes would be built in Dun Laoghaire – Rathdown next year, if the new standard was adopted…

Hubert Fitzpatrick, a director of both the Irish Homebuilders Association and the Construction Industry Federation, has said the move “will increase the cost of new build even further”.

He said house construction prices were still above the anticipated market value in many areas, having fallen 40 to 50 per cent in recent years. In this environment he said it was “wholly inappropriate” that the council would take action that would “increase further the cost of new build”. If it goes ahead he said “there will be very few houses built in Dun Laoghaire – Rathdown next year”.

Submissions on the draft development plan will now be considered by Dun Laoghaire – Rathdown council management, with a report being prepared for the attention of councillors.

In February councillors voted 23 votes to 14 in favour of the change. Final adoption of the plan is not due until later this year.”

House completions continue to stall | Department of the Environment