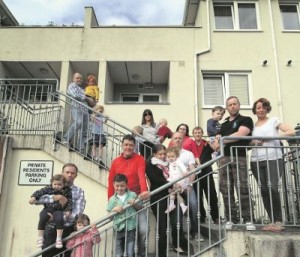 Irish Examiner journalist, Mick Clifford has followed up on his report earlier in the month on the problems being encountered in relation to fire safety at an apartment development in Co. Meath ( Link to original BRegs Blog post here:) in an additional article and on Newstalk lunchtime radio yesterday outlining the reaction of the Local Authority to the situation.

In this article “Meath County Council silent on firetrap building” on 16 June 2015 in the Irish Examiner, Meath County Council’s response to recent press articles regarding potentially dangerous fire issues in an apartment building in Ratoath are discussed, and appear not to address the serious issues raised. Extract:

“…Yesterday, the council said it is in “ongoing contact with the developer through the offices of its fire service and has been closely monitoring the situation regarding Riverwalk Court in Ratoath for some time”.

The council added a meeting was being arranged with the residents for June 22.

A spokesman for the residents, Mark Fitzmaurice, said they have never denied access to anybody to the building.

“We haven’t even had any request for access,” he said.

“As for the council, we’ve been talking to them since we made them aware of these problems in 2011 so I can’t understand why they want a meeting now.

“We sought a meeting last year with the new county manager but we didn’t get it. However, we’ll meet them anytime. We’re desperate to move this on.”

The statement from the council failed to address whether or not an inspection of the premises was conducted by its fire service department, and why, if any report was compiled, the residents were not informed as to whether or not they were living in an unsafe building…

…Currently, the defects insurance company Premier is undertaking remedial work on site primarily concerned with water ingress and other defects. It is unclear whether this work covers the deficits in fire safety in the building.”