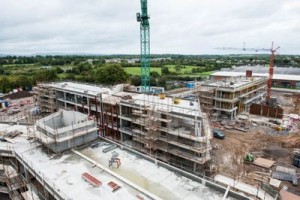 “A special report released by Construction Information Services (CIS) last year detailing the largest, active and ready-to-go projects for 2015 shows there are 518 key projects with a total value €11bn throughout Ireland already in the pipeline…

“We didn’t publish this annual report for four years because of the recession. In 2014, we saw that things are picking up in terms of the number of planning applications and projects that had been put on hold as a result of Nama and lack of finance now coming back into production,” says Tom Moloney, CIS managing director…

“The overall requirement for housing is 20,000 a year, but it is not physically possible for the industry to build that much every year. In the Dublin area alone, there is an immediate need for 6,000 houses. Realistically, the industry will probably manage to build a total of 9,000 houses a year up to 2018, as estimated by the CIF,” says Moloney. [emphasis by BRegs Blog]

According to Parlon, there is a need to encourage house building as clearly a housing crisis is building up with over 90,000 on the social housing list. However, he says, the industry doesn’t have the wherewithal to finance this so it depends on the State and State subsidies…

The Government announced in Budget 2015 a €2.2bn investment over the next three years to provide 10,000 social housing units.

“This is a fabulous figure but we are still waiting to see the detail of what it means – meat needs to be put on the bones, but everyone’s mouth is watering about it,” says Parlon.”