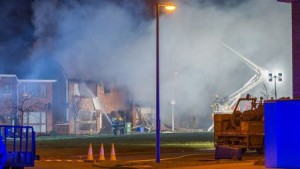 The following articles by Michael Clifford into the unfolding developments in a Newbridge estate suggests that thousands of similar developments may need significant remedial works to make them safe for occupants. An independent report, commissioned by residents, suggests that existing houses may need significant remedial works. Questions remain as to what level of independent inspection was undertaken by the Local Authority after they were alerted to issues during construction, and who will pick up the tab for the significant remediation works that will be required as the original builder-developer appears to be no longer in business. There is a radio clip from Newstalk on 10th June following which discusses recent developments.

“A new report into a housing estate that was the scene of a devastating fire raises questions of culpability and redress for residents, says Michael Clifford.

HOW safe is your home? The question might appear alarmist, but if your home was built in the years of the Celtic Tiger, it is entirely legitimate. A new report into a housing estate in Newbridge, where a devastating fire luckily resulted in no casualties, raises further worrying questions.

For the 90 residents of Milford Manor, there is a litany of defects and shortcomings which, the report states, “leads to a total loss of saleable title and value for the properties and the almost certain withdrawal of insurance facilities”.

The report suggests the dwellings are “life-threatening” in terms of fire safety. Issues like fire doors, lack of cavity in walls, no fire stopping, and faulty construction have all been uncovered.

The extent of the remedial work required is frightening. According to the report by chartered engineer Thomas P English, it will require that “the roof over the separating/compartment walls should be removed for a distance of 1.0m-1.5 m and that the chimney stacks be taken down to “a level sufficient to complete the separating wall construction before rebuilding the chimneys”.

That’s not all. “In our opinion,” the report goes on, “the entire compartment walls between all adjoining buildings should be de-constructed and re-built properly and correctly from scratch to ensure that the entire height of each of the fire-rated compartment walls are suitable and satisfactory for the purpose.” That, in effect, amounts to rebuilding from scratch.

For residents and owners these findings are devastating. They also raise questions as to culpability and redress, and whether the State has any responsiblity. Every homebuyer who acquires a mortgage is obliged to have a property surveyed. It is safe to assume that few, if any, of the houses in the estate were not surveyed. How come such major shortcomings were never uncovered until a fire burnt six houses to the ground in less than 30 minutes?

While the most immediate issues arise for those in Milford Manor, the engineer’s report touches on another issue that should be of concern to hundreds of thousands of homeowners.

In the first instance, Milford Manor was built using a timber frame construction method that was popular during the gallop of the Celtic Tiger. The method is cheap, quick to install, and the frames are prefabricated. Increasingly in recent years, questions are arising about the quality of homes built by this method. In particular, there is no tradition of timber-frame construction here, and installation requires a high degree of precision. Was anything put in with a high degree of precision in the chaotic building environment leading up to 2008?

In the English report, questions are raised about the quality control of the method employed in Milford Manor.

“In the various documentation available to date there has been no mention of what company designed and constructed the timber framed units for erection at this estate. This should be ascertained along with details of what standard was utilised therefore.”

There is no record of what standard or road tested design method was used by whatever company prefabricated the units. That of itself is a barely believable omission, and feeds into the even bigger question of who allowed such buildings to be constructed, and passed off as safe and worthy of habitation (The developer, Barrack Construction, went into liquidation in 2011). At the conclusion of the report two questions are posed. “What were the building control authority inspectors and structural insurance inspectors checking for and against when they attended on-site for inspections during construction?” and “What and whose design actually did they inspect when they came on site during the construction phase?”

The obvious answer is there was no control or inspection. It is widely acknowledged, if generally whispered, in construction circles that there was a free-for-all in those frantic days.

Houses and apartments were thrown up with the imperative of earning a quicker buck than the competition. Standards were entirely a matter for the integrity of individual builders and developers.

Some of those doing the work retained a sense of pride and integrity, despite the pressure to let standards go to hell. Many did not. Building control departments in local authorities were cut to the bone to allow the developers get on with building a nation in their own image.

The results of that regime are painfully becoming obvious in various estates as concerns literally seep out of the walls. So far, nobody has died as a result of the free-for-all regime.

Is the unconscious strategy now to wait for somebody to die, an emergency then being declared by government, followed by soul-searching and a stab at a resolution.

Is that really what it will take to get the relevant powers to wake up to this issue?”

A damning new report highlighting major fire safety concerns in a Newbridge housing estate has concluded that the houses have no resale value and will almost definitely have insurance cover withdrawn.

The Milford Manor estate was the scene of a devastating fire on March 31 in which six terraced houses were burnt to the ground in less than half an hour. The latest engineers’ report, commissioned by a couple living in the estate, concludes that there are “major and life- threatening serious shortfalls and discrepancies” in the construction of the houses, particularly in relation to fire safety.

The report details serious issues in relation to the construction of walls, ceilings and the supply of fire doors, all of which are by design supposed to have a one-hour fire resistance to stop the spread of fire.

In enumerating the litany of shortfalls, the report poses questions about how the houses were allowed to be constructed as they were.

“What were the building control authority inspectors and structural insurance inspectors checking for and against when they attended for inspections during construction,” the report asks.

“What and whose design actually did they inspect when they came on site during the construction phase?” The report was commissioned by the couple following a briefing from officials in Kildare County Council who told residents that it was up to themselves to check out their homes for deficiencies after a report commissioned by the council on vacant houses found a high level of dangerous conditions.

That report was in response to the fire which destroyed the terrace of houses in little over 20 minutes. Typically, fire safety design provides for a one-hour delay in fire spreading between each house. The extent of the fire raised serious concerns about the possibility of widespread problems with the construction of the houses. The houses were built in 2006 by Barrack Construction, which has since gone into liquidation. They were built using timber frame construction, which requires a high degree of specification, and they were built at a time when the level of inspection in house building was at a minimal.

The most recent report, completed on May 20, outlines in the starkest terms the consequences for the owners of the 90 houses in the estate pointing out that the shortfalls detected “leads to a total loss of saleable title and value for the properties and the almost certain withdrawal of insurance facilities thereon by insurers (as soon as they are further informed on the issues)” .

Local independent councillor Willie Crowley has called on the Government to act on what he calls a “fire time bomb”.

“They risk being held responsible for all time in failing to act and take measures to prevent a disaster of unimaginable proportions which could occur at any time in the future,” he said.”

‘So far, we have been spared tragedy”- the legacy of boom-time housing | Michael Clifford