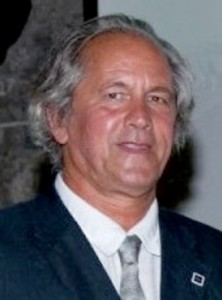 On 12 August the RIAI issued a statement to its members regarding the recent Department of the Environment, Community and Local Government (DECLG) announcement on the conclusion of the the Ministerial Review of SI.9 (Link to report on DECLG consultation process here).

The RIAI response to the DECLG consists of a letter (copy below) sent by its secretary, Joe Kennedy, to two department officials, Aidan O’Connor and Martin Vaughan. It does not appear to have been sent to either of the two Ministers or the Secretary General at the DECLG. The letter seeks urgent clarification on a number of issues and contains 16 questions. Many of these relate to matters not covered by the Ministerial Review and appear to indicate a continuing broad concern about SI.9 legislation by one of the principal stakeholders involved in its implementation – almost 18 months after its introduction.

In a covering note to members attached to the copy of the letter to the DECLG, the RIAI President, Robin Mandal, notes:

“the RIAI has a number of serious concerns and these will form part of our communications. We are very concerned that there has not been a root and branch review of the new Regulations as was promised.  The Report makes only passing reference to the broad range of items included in the RIAI formal submission.  We are particularly concerned about the lack of focus on strengthening the system for projects where the developer / builder has overall authority over all aspects of design and delivery.

“Not least among these concerns are the deeply disturbing references in the statements by Ministers Kelly and Coffey alluding to professionals holding the public to ransom and extorting huge fees for providing the services required under S.I.9…There seems to be an absence of awareness of the various costs that apply in complying with Building Regulations in general, as well as the additional costs involved in S.I.9. The system requires an onerous involvement in inspection and certification by the architect who must use reasonable skill, care and diligence. Yet the Ministers seem to think this can be achieved by putting an unrealistically low number of hours into providing the service…..

……..statements might have been made to give cover to short-term political decisions rather than the best interests of the consumer and better building standards“

It is not all negative criticism of the DECLG. President Mandal also states:

“There is an acknowledgement that Local Authority independent inspections have a value and that is to be welcomed…but fear that the inspection regime now being contemplated for one-off houses will not be properly resourced.

We expect we will know more detail in the coming few weeks and intend making a robust submission and public statement at that time” …..it concludes. 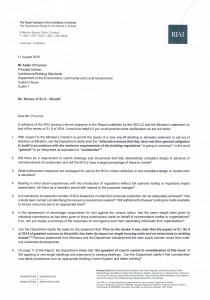 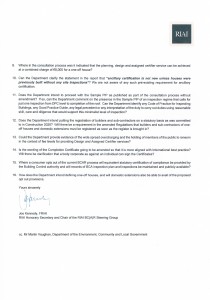