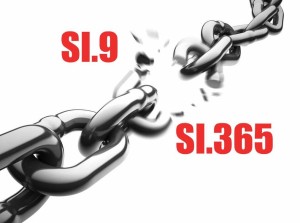 Following the publication of the preliminary results of the SI.9 and SI.365 survey on Monday the BRegs Blog has received numerous requests for further information about the survey and are happy to oblige. Interpreting the data has proven difficult for some of the questions as there is a great deal of diversity between responses perhaps reflecting the confusion in the industry on this subject. The BRegs Blog has been guided by the hundreds of comments provided to support responses. In some respects it is too early to assess the impact of SI.365 on the industry – however after 18 months of operation the industry view of SI.9 is pretty conclusive: it’s not working.

Almost 50% of respondents were registered architects, followed by Architectural Technologists (18%). Engineers and surveyors were over 15% and the remainder were a mix of building owners, contractors, Building Control Officers, solicitors, self-builders, economists, journalists and public representatives. In terms of location there was quote an even mix of rural vs Dublin- almost an even split between 1/3 dublin, 1/3 rural, and the remainder a mix of both. 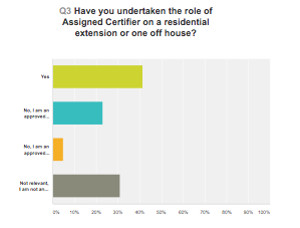 Almost one third of respondents felt a fee of €5,000 was appropriate for an Assigned Certifier for a once-off house project (€250k value). Over 15% thought €7,500 was a better number with only 22% agreeing with the Department suggested fee of €3000. Interestingly over 5% thought a fee in excess of €10,000 was appropriate. In the many comments received on this question it was made clear that the fee was additional to design and project management services at construction stage. 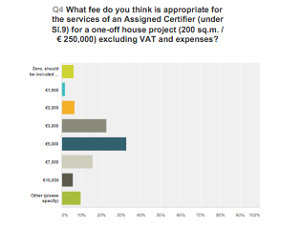 Question 5 asked “Do you think that BC(A)R SI.9 can be considered a success after 18 months in operation? Results are pretty conclusive 63% no, 19% not sure and only 17% yes. Many comments pointed out the advantage of having a formal Inspection Plan but most comments were negative on how complex SI.9 was and virtually unworkable for multi-unit developments.

Sample comments: “We do many retail fit-outs and it doesn’t work on short time-frame or phased projects. Why did we need SI.365 if SI.9 was working? It’s a bureaucratic nightmare. SI.9 is blunt, unfocused and unwieldy. It is too resource intensive. Small practices are being swamped in paper. The intentions to protect the client were good, but the implementation was poorly thought out and ineffective, leading to huge on costs for all.”

“Without question the requirement to implement a planned regime of inspections to validate compliance with the building regulations has resulted in improved quality of construction works.”

Sample Comments: “The reduction in red tape for extensions is welcome but it doesn’t change the fundamental flaws in the legislation. An Irish solution to an Irish problem. In my experience one off are not a huge problem, least cost construction on spec houses is a far bigger problem. Will only be an improvement if other components such as a ‘real & present’ building control inspectorate, registration of contractors and LDI are delivered. It will depend on the setting up of a rigorous local authority inspection facility which would be very welcome” 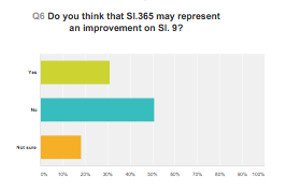 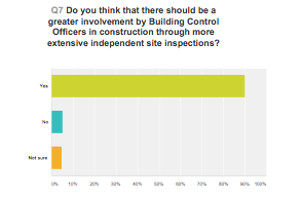 In Question 8 we asked if respondents supported Ministerial inspection targets for Building control Departments with quarterly reporting to Government by each Local Authority, there was a resounding 79% yes, 10% no and 10% not sure, see below: 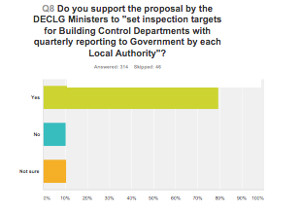 We then asked if respondents supported increases in commencement fees. Funding of Local Authority inspections has long been an excuse not to reinforce Building Control sections. Again a very strong 65% yes, 26% no and 8% unsure. 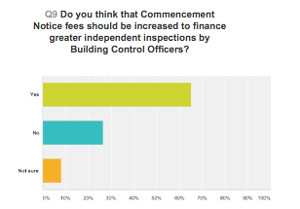 Finally question 10 asked ‘Would you support extending SI.365 to include other low risk projects e.g. small Local Authority, SME and FDI projects?”. This was closer but suggests a strong lobby to reverse SI.9 for smaller low-risk projects. 45% yes, 40% no, 14 % not sure. 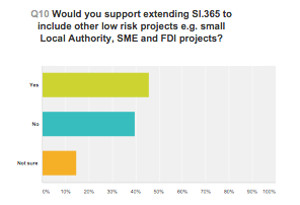 As posted on Monday the one clear message from the survey is that there is very strong support for more Local Authority independent inspections and the consensus view is that SI.9 has not been a success. Similarly SI.365 is not seen as a positive development by respondents. Surprisingly half of those surveyed still support extending the exemption in SI.365 to other non-residential projects, echoing the many comments received that suggest SI.365 is perceived as a “sticking plaster” on a defective SI.9.

The BRegs Blog survey backs-up strong industry sentiment that stretches back almost four years. A 2014 survey of RIAI architects found that over 75% of members were in favour of independent inspections (see post here). In 2013 at an RIAI EGM there was a majority vote, 500 to 8, that SI.9 was not in the interests of the consumer. In the public consultation on SI.80 in 2012 (the predecessor to SI.9), there were a significant numbers of public responses urging the end of self-certification and adoption of best-practice Local Authority independent inspections.

Many thanks to all who participated and to the huge amount of comment and feedback left on many of the questions.

1 thought on ““After 18 months of operation the industry view of SI.9 is pretty conclusive: it’s not working””