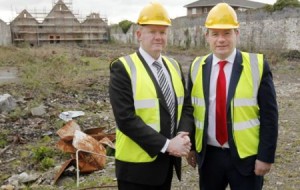 Extract from article below:

We need to undertake a costed assessment of the cost of Building Control (Amendment) Regulations SI.9 introduced in March 2014. Thus far, it has been casually estimated in a “plucking a figure” sense…

Sadly, regulatory neglect at Longboat Quay has shown that the kind of disaster that befell Priory Hall can all too easily occur again.

Building Control regulations BC(A)R SI.9 were introduced in 2014 and no regulatory impact assessment or cost assessment was completed in advance. This is why we must do it now to determine if the cost/benefit analysis stacks up…

SI.9 costs €27,000 per apartment. That’s before Vat at 13.5 per cent and is 100 times more than the same compliance costs in the North. If SI.9 costs were properly factored into our World Bank ranking for “ease of obtaining construction permits”, we would slump to the bottom of the table of 189 countries…

BC(A)R SI.9 is a complex administrative paper-trail that is estimated by the architects’ support body RIAI to take “two to three million man hours” to operate for the housing programme alone. It will cost €200 million to €300 million and does nothing for consumers but generate vast amounts of billable hours. It applies to all building types, not just residential.

The most remarkable thing is that BC(A)R SI.9 doesn’t work.

We now have a highly-elaborate private building control system that does not address the failures of Priory Hall, the toxic legacy of our 25 year system of self-regulation and that instead just generates vast costs. Self-certification gave us Longboat Quay, a 299 unit development completed in 2006 that has an evacuation order hanging over it with residents left trying to sort out the mess themselves.

Consumers can still be left floundering with no insurance, no means to sort out defects quickly without resorting to years of costly litigation and no guarantee of success. Everyone responsible can still walk away.

But how much would a system cost that delivers 100 per cent independent local authority or licensed inspections for all buildings?

Just 200 additional staff at a €15 million annual cost are needed to achieve this, a far less costly and much more effective solution than what these expensive regulations have failed to deliver.

One ray of hope for self-builders and those commissioning their own houses was SI.365, introduced in September by Minister for State Paudie Coffey (himself a self-builder) to reverse the catastrophic 60 per cent fall-off in once-off housing commencements since the implementation of SI.9.

With the stroke of a pen, Coffey reversed policy and removed an administrative burden of close to €60,000 per house off the shoulders of potential own-home builders. SI.365 introduced an “opt-out” for single house developments and residential extensions of any size.

This was broadly welcomed by everyone, except key stakeholders invited by the DECLG in 2012 to participate in the formation of SI.9, (cue cries from the normal vested interests – builders, surveyors, architects and engineers). The upside is that now once-off housing commencements should recover as a result.

However, there is a sting in the tail. Local authorities (along with some OPW buildings) previously enjoyed an exemption from SI.9…Since September 1, local authorities now must build, like their private sector counterparts, under the complex administration of BC(A)R SI.9. Bizarrely, SI.365 opted in all local authority buildings.

The private sector has struggled with implementation of SI.9 for 18 months and practitioners are still reluctant to engage the system. Most practitioners agree it’s not working. Larger firms prefer to use separate specialist certifiers. The issue isn’t really certification at all, it’s about the way it has morphed into nothing more than an expensive paper trail…We have 67 building control officers nationwide and resources are stretched already.

The RIAI estimates that the Assigned Certifier role requires 109 professional hours for a single house. Some 20,000 social and affordable houses scheduled to be built by 2020 could incur additional costs under SI.9 of over €400 million, including professional fees, contractor costs, delayed completions and phasing costs.

A lot of houses for those most in need could be built for this money. It’s time for a rethink.”