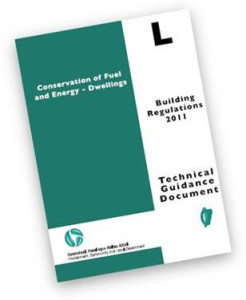 The BRegs Blog seeks to share information on all matters related to Building Control Regulations in an open source format accessible to all. Sometimes it comes across fellow bloggers with something of interest to say or saying it better than the BRegs Blog is doing.

Such a case is a recent blog post by Mike Morris titled ‘Saving Our Energy’. It is about Building Regulations in Ireland and TGD:Part ‘L’ specifically. The post is long at over 4,000 words but it is crammed with commonsense and easy to follow explanations.

While Morris says he seeks to make his blog posts accessible to non-architects the reality is that even architects and other construction industry professionals need a lot of help these days in understanding the increasingly complex regulatory environment that they operate in when this is not being provided by the relevant Government Departments or professional organisations.

“Part L as it stands now means that, if you buy any house in this country built since 2011 it should, by law, be so well-insulated and/or so heavily decked out with renewables that your heating bills per year should be minimal. However, there’s little evidence this is the case, and the Irish public have a right to ask why the hell not….

I believe that Part L is the perfect example of what’s wrong with the Irish Building Regulations as they stand. It’s a badly-drafted, little-understood, and has been widely flouted as a result. Since the regulations were first updated in 2007, my not-at-all-scientific-but-I-suspect-quite-conservative estimate would be that the majority of new dwellings in the country do not comply with Part L. In other words, they’re illegal……

……DEAP is the single most important piece of computer software available to the home-building industry in Ireland, because it’s state-mandated. You have to use it if you’re building a house in this country. No choice. It’s available for free on the SEAI website, and – to give a measure of its complexity – you can also download a user guide over 200 pages long…..

…..If you’re thinking “I don’t really understand this,” then there’s really no need to feel stupid – frankly, most architects don’t understand it either. Again, there’s very little data, but at RIAI training courses a few years shows of hands indicated that fewer than 1 architect in 10 even claimed they could use DEAP. That’s abysmal….

….I’m writing this shortly after Minister Alan Kelly has introduced legislation overriding Dublin City Council’s minimum sizes for apartments, allowing developers (sorry, I mean “industry stakeholders”) to make them smaller. There’s been a lot of very unseemly lobbying for this move, and the justifications have involved many discussions about reducing costs. What hasn’t been raised in this discussion of costs is that (for reasons I’ll explain below) apartments are disproportionately targeted by Part L….

….Let’s lobby for Domestic Guidance Documents, containing simplified regulations in plain language, intended to be read by the general public…..

Mike Morris is a British/Irish architect who practiced in Ireland and Canada and is now working in the U.K.