In an article “Homeowners vote, and homeowners like high house prices“, Eoin Burke Kennedy of the Irish Times wrote that continued pressure on prices in the housing market is predicted by economists. In it, he quotes Ronan Lyons, assistant professor of Economics at Trinity College Dublin as highlighting the cost of Building Control procedures introduced in 2014:

“Costs have risen on the back of new building specifications and a certification regime that puts the onus of regulation on the architect. If you’re an architect that means, instead of visiting projects every 10 days or two weeks, you have to be there every day to make sure every single aspect comes up scratch.

This is estimated to add about €25,000 to the cost of each home. In Northern Ireland, where certification is still done by local authorities, the cost to the developer is £200.

The hard costs of construction are just way out of line, and that’s why we’re seeing nothing built.

The National Competitiveness Council has committed itself to a benchmarking exercise to compare construction costs here with those abroad. The move appears to have been prompted by concern from US multinationals, including PayPal and Google, about the lack of affordable housing for their staff.”

Costs and resources needed to implement onerous procedures and administration roles of Building Control Amendment Regulations SI.9 introduced in March 2014 has been well highlighted by industry and architects in particular. Ronal Lyons is just one of a long line of industry commentators and stakeholders that have voiced serious concerns as to the costs and benefit of BCAR in the past few months. Here are a selection including recent concerns voiced by senior representative of the Construction Industry:

No review of the mult-unit sector is planned however and industry estimates of the cost per apartment over €27,000 due to new procedures. New roles design and assigned certifier costs are a fraction of the actual costs which include increased specification and administrative costs, insurance and phasing carry costs. 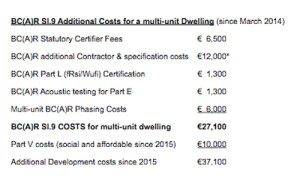 The Department of the Environment (DECLG) estimated that BCAR would cost between €1,000- €3,000 per unit in 2012 (Link here) although they revised this to €3,800 in 2015 for the Assigned Certifier role (link here). No research on costs have been published by the DECLG for other additional costs of complying with the BCAR procedures.