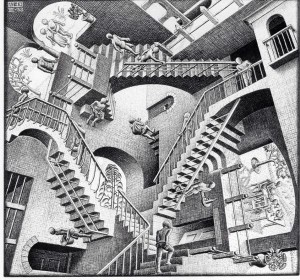 On Friday 29th January the Department of the Environment, Community and Local Government (DECLG) released its research behind the Minimum Apartment Standards, introduced in December 2015. The Department has assessed the viability of apartment building in the city and it does not offer much reassurance to the property sector who according to the Director General of the Construction Industry Federation (CIF), Tom Parlon, just want to “get building”.

It is well established that the total cost of housing delivery when land, VAT, regulatory costs, levies, fees and profit are factored in, are well above current asking prices, and even a cursory analysis will demonstrate negative returns in most areas. Frank Ryan of DTZ warned developers in Cork recently “not to risk being a busy fool” until residential projects become viable. (Link:)

According to the DECLG analysis the 2015 Minimum Standards will deliver units that are financially viable. The basis of its exercise is a single generic apartment floor with ten units, built to the Dublin City Council standards demonstrating a loss of €179,000 (Option 2), and the other cut down standard that barely breaks even (Option 1). Here is the extract of page 9:

A detailed breakdown of this cost exercise in on page 12 (Appendix A): 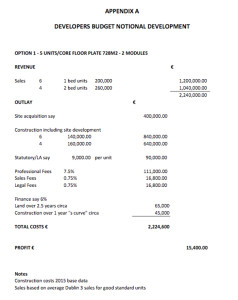 This DECLG analysis suggests that a €15,400 profit on ten apartments costing €2,224,600 is an attractive proposition for private sector developers.

That is a €1,540 profit per apartment, a margin that would be eaten up in construction inflation in the next month before a new Minister for the Environment can take his or her seat at the Cabinet table.

From this very limited TOT the DECLG concludes that the first step in improving viability is to cut living standards.

Minister for the Environment, Alan Kelly T.D. told the Dáil that the reduced standards would cut the cost of every apartment by € 20,000. Meanwhile in Ballymun the same Government Department is funding ‘Modular’ homes at €211/sq. foot when the CIF say that they could be traditionally built for a little more than half that i.e. €127 / sq. foot. We do not know if the Ballymun builder is working for a profit as tight as €1,540 per unit because the details of the contract have been withheld as commercially sensitive (Link:).

Other commentators suggest that tinkering around for very questionable assumptions on one example misses the bigger issues that are the real obstacles to fixing the housing crisis. VAT, Developer’s profit, site costs and BC(A)R totals €147,000 per typical apartment. The SCSI are watching closely, wondering if a new Minister for the Environment will introduce Local Authority inspections (Link:). That’s one calculation they will have to get right

Little boxes… Is that the future of housing Kelly style? | Ireland Today

We’ve made progress on housing, what’s next? | Kieran Rose

1 thought on “Is apartment building viable in Dublin in 2016?”