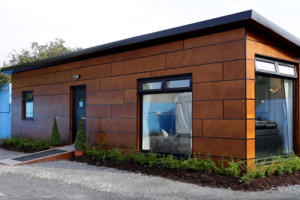 There has been a blizzard of media articles on ‘Rapid’ prefab housing and serious questions are being asked about delays and costs. In the last week Dublin City  Council cancelled and re-issued tenders for the next tranche of 131 homes citing a “lack of interest” and “technical issues”. The first tranche, promised for 18th December 2015, are still not ready for occupation, nine weeks after the end of the 4 week contract.

Fast-track projects need careful management and BCAR compliance issues may well be one of the contributing factors in the recent delays and ‘technical problems’ during the tender process for these much needed homes. Normally in timber-frame projects the owners arrange foundations, siteworks and drainage before the timber-frame (or prefab home) is delivered and installed under a separate contract. This makes sense, cuts costs and avoids delays. However, under BCAR the procurement of prefabs may now become a lot more expensive, as one builder must be  employed from start to finish on a project under the 2014 procedures. As a result a builder has to engage the prefab supplier as a sub-contractor, which generally adds 5% to the cost of the prefab element.

It is reported that each unit of the first tranche in Poppintree, Ballymun is costing €190,000 (see Link). However, this may be even higher when additional costs of up to €60,000 per unit are added for siteworks and vat. These figures do not include the cost of purchase of the site, which in the case of the Tranche 2 Drimnagh site is €120,000 for each house.

With  overall costs for a typical 3 bed prefab of up to €350,000 each (including vat), this form of ‘prefabrication’ is fast becoming unattractive and less competitive when compared to conventional “wet trades” and traditional forms of building. Some industry insiders believe that the Dublin City Council “prefabs” are not modular construction, as recent media photographs show standard timber frame with brick finish, similar to thousands of units built during the boom.

Boom-time houses were generally ‘self-certified’ under the old system that operated before March 2014. However it is still unclear who will be certifying these new prefab homes- will it be the Local Authorities that commission them or the builders themselves?.  Under the BCAR ‘ reinforced self-certification’ regulations, final sign-off by the builder/ supplier or his own employees or the employees of his sub-contractors is permitted without any independent oversight of compliance.

Ultimately, the legal responsibility to make sure that inspections are completed is with the owner, in this case the Local Authority. However, it may well be that the Council subcontracts out these duties to a Design Certifier and an Assigned Certifier within the Modular Homes supplier company.

Recently the BRegs Blog asked who acts as Design and Assigned Certifier of Modular projects? This is the answer that was received from the Dublin Region Homeless Executive:

If Local Authorities are to appoint employees of prefabrication companies in the roles of Assigned and Design certifier, the contractor will be in full control of compliance: complete contractor-controlled ‘self certification”. Given some of the problems with timber frame housing and contractor-led construction in the past serious questions must be asked about ensuring safety in these ‘Rapid’ builds.

Journal.ie “Plans for modular housing slammed as building actual houses would be cheaper”

Dublin Inquirer “Still Waiting: Was “modular housing” ever going to be done on time?”

Bregs Blog “Is Building Control a threat to Christmas completion of modular homes?