The government’s intention is to prioritise the delivery of ‘affordable’ homes under €300,000. All eyes are on the bottom line as the costs of construction have come under intense scrutiny. Those seeking to help solve Ireland’s housing emergency would do well to take a very close look at the costs associated with two separate but connected housing schemes under construction on the island of Ireland.

These housing schemes are the ‘Rapid’ social houses commissioned by Dublin City Council and funded by the Department of the Environment at Poppintree in Ballymun and the other scheme is less than 100 miles away in Dungannon, Co. Tyrone. What is of particular interest and relevance is that both schemes are being built by the same firm of builders, Western Building Systems based in Coalisland, Co. Tyrone.

The houses appear to cost similar amounts but in Co. Tyrone you get a lot more ‘brick for your buck’! 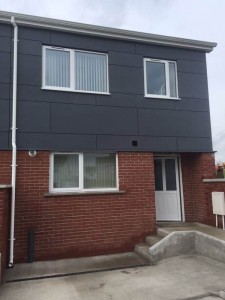 The ‘Rapid’ Social houses in Ballymun are costing upwards of € 240,000 each to build. This excludes any land costs, planning fees, development levies or developer’s profit that would need to be factored in to most new housing developments. For this amount the completed house is a terraced, three-bedroom unit with a below minimum standard floor area of 91 m2 (image above) and represents a build cost in the region of a whopping €2,660 per square metre. 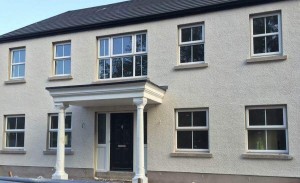 Travel north to Dungannon and the same €240,000 (£195,000) is the selling price for a detached 4/5 bedroom house with a floor area of over 200 m2, which is over twice the size of the Ballymun units. This amount has also to cover items such as planning fees, developer’s profit and cost of the site – the latter estimated at about €40,000 of the sales price. This equates with a building cost of under €1,000 per square metre making the Ballymun homes over two and a half times more expensive.  Full details on the Dungannon development here: (LINK)

It is the BRegs Blog’s belief that a detailed comparative analysis of these two schemes would provide crucial information on why construction costs south of the border are so much higher than for our Northern counterparts. It would be very interesting to hear from Western Building Systems on how this anomaly is explained between the two jurisdictions in which they are operating.

Is it not time for an independent Regulatory Impact Assessment to be carried out on the barriers to the delivery of affordable housing in the Republic of Ireland and see what can be learned from the Northern Ireland experience? This is certainly something the Dáil Committee on Housing and Homelessness, established last week, needs to examine as a priority.

SI.9 costs for a typical house

3 thoughts on “An ‘affordable’ family home for less than €250,000 | Comparing costs North and South”