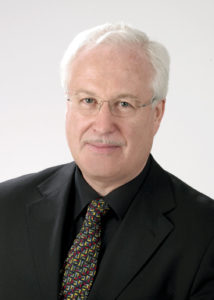 The first International conference on Sustainable Fire Engineering (SFE 2016) will take place in Dublin on 28-30 September 2016 (full details here: Link). The BRegs Blog received permission from one of the SFE 2016 Management Team, Architect and Fire Consultant, CJ Walsh, to publish  edited extracts from one of his blog posts on fire safety and housing. The full post may be accessed here (Link:). This issue remains relevant as the report on last year’s Newbridge Fire, scheduled for publication at the end of January, remains under lock and key at the Department of the Environment. Questions are also now being asked on the safety and value for money of the timber-framed ‘rapid’ housing under construction in Ballymun.

Extract: It Happened One Night!

Maybe if it hadn’t been that particular night, amidst all the festivities of New Year’s Eve 2015, we would never have heard about the ‘Address Hotel’ fire, in Dubai (UAE).  A long search on the Internet afterwards led to the detailed, post fire analysis report on the 2014 Lacrosse Docklands Fire, in Melbourne (Australia) followed by some more searching, and a very large can of worms opened up on similar nasty façade (external fabric) fires in many, many countries involving large chunks of flaming debris falling from terrific heights, carried by the wind to a significant distance away from the building of fire origin.

Some people have tried to suggest that the only reason for these fires is inadequate building codes or regulations.  This is not so.  The reason for these fires is much more than that, it’s the ‘SYSTEM’ !   In other words, how the International Construction Sector is organised and goes about its ordinary, everyday activities and tasks.  We must also talk about poor quality design and construction and a lack of stringent, independent enforcement of effective building codes, regulations and standards.  I have written this down many times before:

Self-Regulation is NO Regulation!

It is clearly and amply evident that Conventional Fire Engineering as currently practiced, internationally, is no longer ‘fit for purpose’.

The general public was shocked and stunned, to put it mildly, by a very rapid and extensive 2015 Terraced Housing Fire on the outskirts of the Dublin Region. 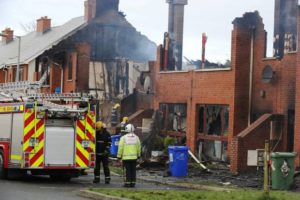 The 2015 Terraced Housing Fire, shown above, should not have been a surprise to the ‘System’ in Ireland.  Research carried out in the U.S.A., Belgium and The Netherlands since 2012, and a serious PassivHaus Apartment Fire in Köln, Germany, on the night of 5 February 2013 have all shown that the modern home (highly insulated, airtight, packed with electronic equipment and wiring, and fast-burning synthetic furnishings, etc.) is the ‘perfect storm’ of fire conditions and outcomes.  More open residential design + increased fuel loads + new construction systems and materials = faster development of fires, much reduced times to flashover, far less time for occupant evacuation, particularly people with activity limitations and shorter building collapse times

The time to flashover in modern high-performance housing, i.e. Sustainable/Green/PassivHaus/Eco/Bio/+Energy/Low Carbon/Zero Carbon/Smart can be seven times faster than in conventional/legacy housing or less than five minutes, compared with just over 29 minutes! All of this research can be found on the Links & Docs Page of the SFE 2016 DUBLIN Website.

Let us be crystal clear; there is nothing Sustainable/Green/PassivHaus/Eco/Bio/+Energy/Low Carbon/Zero Carbon/Smart about the post-fire scenes of destruction shown above.  And only for the physical separation between terraces, which can be clearly seen in the photograph below the fire would have kept spreading.

Without a balanced, proper approach to the issue of Fire Safety in this type of modern, high-performance housing occupant safety is seriously threatened.

So what needs to change?  In Ireland, our immediate problem is Timber-Framed Housing and the following is an outline of what must change NOW!

About the Author: C.J. Walsh   B Arch FRIAI MIBCI MIFS MIFireE is a Consultant Architect, Fire Engineer & Technical Controller. He is also a consultant to An Bord Pleanála and legally registered, in Ireland, as an ‘Architect’.