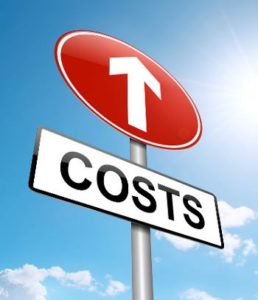 The Royal Institute of the Architects of Ireland (RIAI) issued estimates, to their practice members on Friday last, for the time needed for Assigned Certifier duties on small domestic projects such as extensions to houses ranging in value between €100k and €200k (excl. VAT).

The time estimated for the Assigned Certifier role for a €200,000 (excl. VAT) residential extension project is an additional 85 hours  on top of standard architectural services. 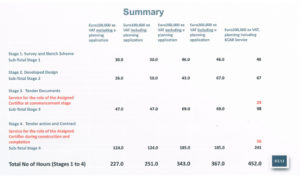 The above table suggests a cost to the consumer of approximately €7,841* for Assigned Certifier statutory inspection duties (incl. VAT) for a modest €200,000 domestic project. This excludes other professional BCAR costs such as the cost of Design Certifier or other Ancillary Certifier (services and structural engineers) fees. The RIAI have not tabled any separate charge for the role of Design Certifier, despite additional onerous liabilities and administrative workload associated with this role.

Indicative costs for ancillary certifiers for domestic projects (structural and services engineers) are in the region of €2,300 incl vat each, bringing up the cost for a client appointed professional design team for BCAR to €12,453 (incl VAT). This is before any defensive specification costs, increased testing, thermal modeling, contractors additional costs for administration and insurance or other sub-contractor design and ancillary certification costs are added, which can easily double this figure.

The RIAI have been very consistent in assessing hours required for BCAR. Early estimates, at over 100 hours for a mid-sized commercial project, were issued when BCAR SI.9 was launched in March 2014. Then Minister Phil Hogan balked at official stakeholder estimates which were a multiple of his anticipated €1000- €3000 per unit. At the time he said professionals were engaging in “financial extortion” and reiterated earlier Department of Environment suggestions of less than €3000 all-in BCAR costs ‘per residential unit’.

More recently Minister Alan Kelly has labelled certifiers fees as “exorbitant charges” and an ‘opt-out’ SI.365 was introduced for once-off houses by Minister Paudie Coffey in September 2015 as a direct result in the pronounced drop-off in the once-off commissioned house building sector in the 12 months following introduction of BCAR. Industry experts had quoted costs of up to €50,000 for self-builds in the lead-up to the review.

Subsequent statements from former RIAI president Robin Mandal in November 2015 reinforced these figures when he suggested that BCAR would take between 2-3 million ‘man-hours’ to administer for main certifier roles only in a normal functioning housing sector. As BCAR affects all construction based on these numbers the annual cost of the onerous procedures could well be in excess of €500m per annum.

This remains at odds with the Construction Industry Council, a group of construction stakeholders which the RIAI is now chairing. Last September the CIC wrote to the Department of the Environment claiming,  in relation to the amended Building Control regulations SI.365, claiming that there was “no empirical data” for claims of exorbitant fees for SI.9 and that typically the amount charged was between €3,000 and €4,000 — “in line with what the Department expected”. (Link here). Only weeks earlier the architects representative body (who are part of CIC) had made a submission to the Minister (and advised their own members) that the job could not be done properly for less than €8,000. (Link here)

If you take these two statements at face value an Assigned Certifier will take 85 hours to administer the BCAR role on a modest project for a €3,500 fee, the annual salary basis for an experienced professional architect would be a mere €23,000.

No wonder there is confusion in the industry as to what BCAR should cost, and what level of service is reasonable to provide.

Other commentators have suggested roles can and are being charged out at a fraction of this cost. Who is right? Certainly almost agree there is a ‘race to the bottom’ at present, with all the unintended consequences for quality that that invariably brings. When the dust settles, Architects may find themselves being put at a competitive disadvantage to other professions who may choose the lower fee and budget hours accordingly.

Is it time for a re-think?