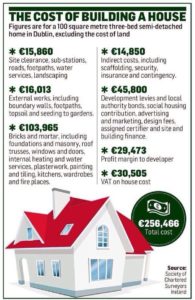 Many people share the confusion articulated this week by Deputy John Curran T.D., the chairman of the new Dáil Committee on Housing and Homelessness. While discussing building costs, Deputy Curran said,

“I share concern about building costs because I am frustrated. We are talking about building a house, yet, as a committee, we are not able to find out the labour cost in building one”.

Well why wouldn’t Deputy Curran TD and the new Dáil Committee on Housing and Homelessness ask the Construction Industry Council (CIC), comprised of representatives of the six largest construction bodies operating in Ireland, about construction costs?

The members of the CIC are:
• The Association of Consulting Engineers in Ireland (ACEI)
• The Building Materials Federation (BMF)
• The Construction Industry Federation (CIF)
• Engineers Ireland (EI)
• The Royal Institute of the Architects of Ireland (RIAI)
• The Society of Chartered Surveyors Ireland (SCSI)

Unfortunately the CIC seem to be confused too!

There now seems to be discord among two CIC member bodies, the CIF and the SCSI. This time it is over the actual cost of building a house.

On Tuesday Tom Parlon, Director General of the CIF told the Dail Committee on Housing & Homelessness that:

“I guarantee… that any builder, including the two gentlemen present, would take the hand off anyone they believed was offering a €20,000 margin on a €300,000 house. It is certainly not the case that such margins are available” (<8% profit margin).

Just last October,  another CIC member the SCSI commissioned an economist and published construction costs including a  €30,000 profit on a €255,000 house.” (Link: Here). This week  SCSI Director General, Patricia Byron, told the Committee that “are very happy to work with (the committee) on an ongoing basis because we survey our members on a regular basis. Where other reports take six months to a year, we do not have that time lag. We are an independent professional body that tells it like it is” (Link: here)

Earlier this week we reported on further discord within the CIC; an apparent clash between one of the above members on the costs of Building Control inspection and the level of service required for a basic house extension  (Link; Here).

The RIAI, who currently chair the CIC, was at variance with the CIC itself at these costs with figures ranging between €3,000 and € 8,000 for the Building Control supervision fee for a modest building project.

There are many who consider that CIC members, such as the CIF, RIAI and SCSI, make for strange bedfellows. It is almost a case of the poacher getting into bed with the gamekeepers with nobody looking out for the homebuyer. Perhaps the CIC acronym actually stands for:

The members of the Dáil Committee on Housing and Homelessness are as follows:

The Committee have an open call for submissions by next Wednesday. (Link: Here) Other Links of Interest:

CIF & House Prices | Do you want your old lobby washed down?

1 thought on “CIC | ‘Construction Industry Council’ or ‘Confusion in Costs’?”