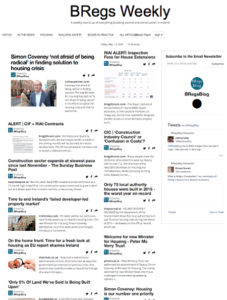 The housing crisis escalated this week to be the number 1 priority for the new minority government. New Minister Simon Coveney has said “he is not afraid of being radical” in his efforts to tackle the homelessness crisis.  There were a number of interesting appearances this week in front of the Oireachtas Committee on Homelessness and Housing, where industry vested interests struggled to provide detailed breakdowns of the cost of a typical house.

Media spotlight this week fell on the failures of the ‘developer-led’ supply model for residential and social housing.  Commentators and state agencies believe that developers are engaged in land-hoarding, waiting to commence builds for increased returns. Elsewhere, it has emerged that a “significant majority” of the €1.7bn set aside last year for the period 2015-2017 by then minister Alan Kelly to build social housing has not yet been spent by local authorities.  “They have not spent their allocation of capital for 2016 and are not on target to spend it,” Finance Minister Michael Noonan has said.  Less than 80 Local Authority social housing homes were built in 2015.

Spiralling costs of complex administrative procedures to demonstrate compliance with Building Regulations introduced in 2014, BCAR SI.9, were noted when the Construction Industry Federation (CIF) issued advice to members not to accept specific BCAR duties and responsibilities recommended by architects in current tenders.  This follows on from advice issued last week by the Royal Institute of the Architects of Ireland (RIAI) on time needed for BCAR duties for professionals on a typical €200,000 residential project. The advice suggests additional professional fees of over €12,000 for architects, engineers and surveyors for minor residential projects, excluding additional contractor costs.