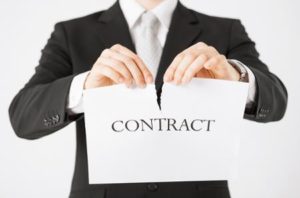 Construction personnel and building owners are getting caught in the crossfire of an escalating conflict between the CIF and the RIAI with regard to the impact and interpretation of BCAR SI.9 on building contracts. This has potentially very serious financial implications for anyone who gets it wrong. On 9th May 2016 we had noted the CIF rejection of a BCAR SI.9 addendum to contracts issued by the RIAI in 2014 (Link :Here). The CIF told contractors to reject this ‘unilaterally issued’ RIAI addendum to the standard form of contract.

Last Friday the RIAI alerted members to the direction issued by the CIF, without mentioning that the CIF had directly requested the RIAI to withdraw it from circulation. RIAI re-issued the addendum and advised architects to continue to push this change on behalf of their clients. It is not clear whether CIF members will now reject or qualify tenders issued on this basis.

This is a serious development as confusion may lead to disputes and delays.

The May 2016 edition of this RIAI addendum is substantially the same as the earlier 2014 version previously rejected by the CIF, with the addition of a note “RIAI Note (May 2016): This Addendum has not been approved by the CIF or SCSI. The RIAI does recommend its use by RIAI Members acting in the role of ‘Architect’ under the Blue and Yellow forms of RIAI contract.”

Notwithstanding contractors’ dissatisfaction, this ‘quick fix’ is again being promoted by the RIAI who has not published its legal advice backing its position or any alternative solution.

Normally changes to building contracts are subject to negotiation and agreement between the RIAI, CIF, EI, ACEI and SCSI (architects, builders, engineers and surveyors), joint members of the Liaison Committee*. The legal profession and many senior professionals are again puzzled as to why no agreement was reached on basic contractual obligations over the past two years when the problems were so evident to everyone involved in the construction industry.

Continued contractual delay and uncertainty will place yet another barrier to recovery in our housing sector. In view of the seriousness of this issue for our readers the BRegs Blog Admin Team are putting out a call for advice and hope to be able to publish some recommendations in the coming days.

We understand that the CIF has issued a Memo to its members asking that they do not accept the Addendum published by the RIAI and recommended for use by RIAI Members acting as “Architect” administrating RIAI forms of building contract.  The reason given by the CIF is that the Addendum was not agreed with the CIF and SCSI at the Liaison Committee.

The RIAI Addendum was drafted to give contractual recognition to two important factors;

Following on the firm advice from within RIAI practice circles and specific legal advice, the RIAI decided to proceed to publish the Addendum for use with the RIAI Articles of Agreement, Blue, Yellow forms,  SF88 and White forms. Please note that only the Blue and Yellow forms are liaised upon with the CIF and the SCSI.

This version of the Addendum – Edition  2016 – May 2016 is recommended for use by RIAI members acting as “Architect” under these forms. 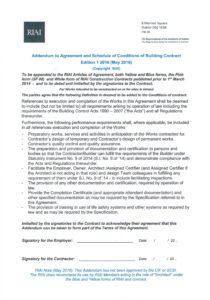 Please note that this Addendum may not be needed after the new 2016 Revisions to the RIAI forms are published in July as planned.  Progress is being made at the Liaison Committee with this in mind. The definition of the works will be in the wording of the revised forms.

*The Liaison Committee is made up of the same member organisations as the Construction Industry Council (ACEI, CIF, EI, RIAI and SCSI). The primary function of the Liaison Committee is to monitor the provisions of the Contract for privately funded building projects in Ireland and from time to time make recommendations to its Constituent Bodies for any amendment to the Agreement and Schedules of Conditions of the Contract issued by the RIAI in agreement with the CIF and the SCSI that may be required.

Ancillary Certificates -Why on earth would you want to sign that?