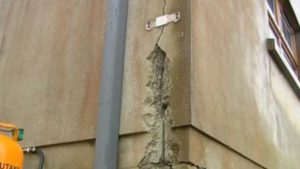 Significant problems with construction materials re-emerged this week when RTÉ broadcast a Prime Time special on mica infested blocks in Donegal (See “Crumbling Donegal Homes“). This is a major structural problem for homes affected and in many cases complete demolition and rebuilding is the only remedy, similar to pyrite problems identified in concrete blocks. Mica may affect up to 5,000 homes according to local engineer Damien McKay on Ocean FM (Listen here).

Members of the public who expect this problem to go away will be sorely disappointed. We have seen a re-occurrence of pyrite in a number of developments in Mayo and Dublin. Two housing schemes in Dublin and one in Louth were demolished as recently as 2014.

In 2014, former Minister for the Environment, Phil Hogan, promised that “The Building Control Amendment Regulations (BCAR) set out to prevent the future re-occurrence of pyrite damage” (See here). BCAR SI.9 of 2014 places very onerous administrative and record keeping duties on professionals, contractors and owners of all building types but no checks on defective material have been put in place.

Under their new regulations (BCAR SI.9) a home cannot be occupied until an architect or engineer signs off and this means warranting 100% that all of the building materials are “proper” and free of defects. Phil Hogan actually said so- “If anyone signs a statutory certificate for a building which subsequently proves to be non-compliant, they can be held legally liable for the consequences”. The Department of the Environment may have intended this system to be a guarantee, a one stop shop for remedying defects quickly.

Fundamentally the BCAR SI9 process is a ‘reinforced system of self-certification’ that relies on individuals’ insurance policies in the event of defects being discovered post completion. However available insurance policies do not cover pyrite, mica and defective building materials.

Consumer redress from suppliers is not certain either. Developers, builders, manufacturers and suppliers involved in a six year old legal case involving pyrite contamination are still awaiting the outcome of a legal case that has gone all the way to Europe. This case is, “on its way to becoming the longest running and most expensive court case in the history of the State” (see link here).

The responsibility for monitoring, inspecting and regulating the construction materials sector under EU Regulations resides with the Department of the Environment who have appointed an existing member of staff in each of the Local Authorities to undertake market surveillance measures in respect of all construction materials.

in 2014 a Government report submitted to Brussels confirmed that Local Authorities were not  actively inspecting the materials sector due to lack of resources. There has been no increase in staffing for market inspections by Local Authorities in the intervening period (see report here).

With a cost per house to remediate pyrite at €64,000 per house and the cost of rebuilding a pyrite affected home at over €180,000, who is protecting the consumer?

For professionals involved under BCAR they are certifying absolute guarantees for buildings which are being supplied by an unregulated materials industry, not covered by Professional Insurance, exposing certifiers to significant personal liability. Purchasers are still facing at years of costly litigation with no guarantee of success.

In an interview in the RTÉ programme, the head of the NSAI called for a more robust proactive Independent Local Authiority Building Control system. It is time for the State to meet their own obligations, not just protect the EU market but also to protect homebuyers, instead of relying on a paper trail which does nothing to prevent recurring problems with pyrite and other defective materials.

DECLG on Pyrite and Mica: October 2012