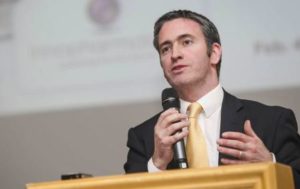 As Damien English TD was not in a position to give a full reply, the BRegs Blog ‘FACTCHECK’ Team decided to fill in the blanks [Bregs Blog NOTES IN CAPS]:

Damien English (DE): “The key impact on costs associated with the implementation lies in the requirement for the appointment of an Assigned Certifier whose role, in conjunction with the builder and the project team, is to draw up and execute an appropriate inspection plan and to certify the building’s compliance with Building Regulations on completion”

Bregs Blog: THE ASSIGNED CERTIFIER IS ONLY ONE ROLE, THESE REGULATIONS ALSO REQUIRE OWNERS TO APPOINT A DESIGN CERTIFIER AND NUMEROUS OTHER SPECIALIST ANCILLARY CERTIFIERS.

DE “While fees for professional services are determined by market forces and are therefore outside the scope of my regulatory powers, as part of last year’s review of the first twelve months of the operation of the regulations, my Department prepared a Sample Preliminary Inspection Plan for a Single Unit Dwelling on a Single Development…The cost calculations published to accompany the Sample Preliminary Inspection Plan demonstrated that the Assigned Certifier role could be achieved at an approximate cost of €3,800 inclusive of VAT”

Bregs Blog: THESE INSPECTION FEES (€3,800) SUGGESTED BY THE DEPARTMENT WERE DISPUTED BY THE PROFESSIONAL BODIES, PRINCIPALLY THE RIAI WHO COMPUTED €7,990 (NOT €3,800) FOR THIS ONE ROLE, SAYING…”There seems to be an absence of awareness of the various costs that apply in complying with Building Regulations in general, as well as the additional costs involved in S.I.9. The system requires an onerous involvement in inspection and certification by the architect who must use reasonable skill, care and diligence. Yet the Ministers seem to think this can be achieved by putting an unrealistically low number of hours into providing the service….. (LINK)

THE CHARTERED INSTITUTE OF ARCHITECTURAL TECHNOLOGISTS (CIAT) TOOK ISSUE WITH… “the charge out rate suggested by the DECLG. A €65/hour charge out rates equates to an annual salary in the region of €52,000 which is comparable to the pay of a clerk of works in the public sector” (see LINK)

FORMER MINISTER PAUDIE COFFEY CRITICISED THE ‘OUTLANDISH” COST OF REGULATIONS AND BROUGHT IN AN OPT OUT FOR ONE OFF HOUSES IN SEPTEMBER 2015 (SI.365) BECAUSE OF THE HIGH COSTS (LINK) ACKNOWLEDGING THAT THE DEPARTMENT’S OWN ESTIMATE OF €3,800 COULD NOT BE ACHIEVED AND WAS EXCESSIVE.

Bregs Blog: THE BASIS FOR THIS IS NOT CLEAR AND IS NOT CALCULATED OR CLARIFIED IN ANY PUBLISHED DOCUMENTATION.

DE: “These costs relate to the implementation of the inspection plan on a single non-complex dwelling; they do not relate to multi-units dwellings, such as apartments, where the costs may be considerably lower due to economies of scale”

Bregs Blog: MULTI-UNIT DEVELOPMENTS (APARTMENTS) HAVE SOME SAVINGS WHERE MULTIPLE INSPECTIONS CAN BE DONE ON THE SAME DAY, BUT THERE ARE ADDITIONAL COSTS SUCH AS INCREASED FINANCING CARRY COSTS AT COMPLETION STAGE, DEFENSIVE SPECIFICATION COSTS, INCREASED ACOUSTIC TESTING, ANCILLARY CERTIFIER AND SUB-CONTRACTOR COSTS, INCREASED CONTRACTOR ADMIN COSTS, fRsi CALCULATIONS ETC. AND CAN BE IN EXCESS OF €25,000 PER UNIT (see link here)

DE: ” A copy of this plan and all other documents released as part of that public consultation are available on my Department’s website at .

Bregs Blog: IS THERE A LINK TO THESE SUBMISSIONS? AT TIME OF WRITING BREG BLOG TEAM WERE UNABLE TO LOCATE THE DOCUMENTS NOTED.

DE: During the public consultation, a number of respondents confirmed that the Assigned Certifier services could be secured in line with the Department’s estimates”

Bregs Blog: IT’S SURPRISING THAT A NUMBER OF INDIVIDUAL RESPONDENTS ARE MENTIONED AND NOT THE REPRESENTATIVE PROFESSIONAL BODIES SUCH AS SCSI, CIAT, ENGINEERS IRELAND AND RIAI WHO ACKNOWLEDGED HIGH COSTS OF BCAR SI9 AND REPRESENT MANY THOUSANDS OF MEMBERS WHO ARE OPERATING THE SYSTEM.

DE: ““In general terms, the cost of delivering housing is dependent on the type, size and geographic location of the development concerned and on the contractual arrangements leading to its construction…Fees for professional services, including those relating to acoustic and energy performance requirements in accordance with Parts E and L of the Building Regulations, are determined by the market place and are separate to requirements under S.I. No. 9 of 2016 as are contractor and specification costs and Part V** obligations”

Bregs Blog: THE COST OF DELIVERING CERTIFICATION SERVICES INCREASED UNDER THESE REGULATIONS AND SO HAS THE COST OF MULTIPLE TESTS BECAUSE EVERY HOUSE/ APARTMENT HAS TO BE FULLY TESTED AND CERTIFIED INDIVIDUALLY UNDER SI9. SPOT-CHECKS IN AN ESTATE OR APARTMENT BLOCKS ARE NO LONGER ADEQUATE.

DE: “In the latter case, new obligations under Part V** of the Planning and Development Acts have been introduced to balance viability and social housing delivery. In addition, revised planning guidelines on apartment standards, which are now on a statutory footing under the Planning and Development Acts, have the potential to significantly reduce the cost of high quality apartment building”

“In accordance with the Programme for a Partnership Government, my Department is preparing a new Action Plan for Housingand will continue to liaise closely with other Departments and agencies as well as with industry stakeholders with a view to identifying any reasonable and appropriate measures that may be taken in the interests of reducing construction overheads to facilitate an increased level of housing output.”

Bregs Blog: THIS IS TO BE WELCOMED. SEVERAL OTHER PROPOSALS HAVE BEEN MADE FOR AN ALTERNATIVE BUILDING CONTROL SYSTEM AND THE BREGS BLOG UNDERSTAND THAT CHANGES ARE PLANNED.

UK and Ireland: Take a quick drive to Newry with BReg Blog…