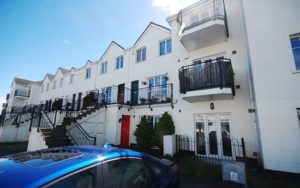 Fingal Co Council confirmed that it had spent over €1 million repairing the units at Holywell, a major housing development in Swords, where units sold for almost €500,000 during the boom.

The draft report, which has never been published, was commissioned in January 2012 to look into “possible systemic shortfalls” in fire separation systems after concerns were raised during a routine maintenance inspection. However, social housing tenants and owner-occupiers had already been living at the development for many years.”

Although remedial work was carried out by the Local Authority to make 55 homes safe, at a cost of up to €20,000 per apartment, Local Authority tenants were not made aware of the dangerous state the units were in at the time and were not evacuated.  Repairs appear to have been made when units became void and in a piecemeal basis.

There is nothing in the report or article to suggest that the defects in units are not typical and affect the entire development.  Why did the Local Authority not act and publish the report immediately?  Why was an evacuation order not issued?

“In response to a series of questions from this paper, Fingal Co Council said that its primary responsibility as owner of the properties was to rectify the issues uncovered in the report, and its secondary responsibility was to inform the developer and management companies of the findings.

A spokesperson said: “The council then engaged in correspondence and meetings to ensure the developer and management companies were aware of their responsibilities and were taking action to identify if similar issues had occurred in other blocks within the estate. It was the responsibility of the developer and the management companies to bring to the attention of other property owners in the development any issues that needed to be addressed.

…Fingal Co Council told this newspaper that the issues it uncovered “would have been caused by poor workmanship and non-compliance with building regulations”.

Private owners in the estate are now only becoming aware of significant safety concerns they have unwittingly lived with for many years.  It would appear that the Local Authority ‘put their head in the sand” on issues and preferred to leave tenants and owners live in dangerous homes rather than act or make them aware of the serious safety issues.  Which official in Fingal County Council made the decision to suppress this information?  Was the Department of the Environment aware of the report?  Does the state have a duty of care to citizens to act immediately if they know a building is hazardous?  Local Social Democrats councillor Cian O’Callaghan said:

“The publication by The Sunday Business Post of a report into fire safety deficiencies at Holywell in Swords raises a number of serious questions for Fingal Co Council.

“Why, for example, did Fingal seemingly fail to detect these issues in the construction of units, and again when it was acquiring these units? What efforts did the Council make to notify residents and homeowners when these issues came to light in 2012?

“I’ve been raising these issues and asking questions for some time at council meetings, and have been met with a brick wall. I’m now very concerned that we could be looking at serious failings by council management. This smacks of a ‘head in the sand’ approach to building control,”

Is this the only privately-commissioned report by a Local Authority that has been swept under the carpet by the Department?  How many more state-purchased Part V social housing units built by private developers are dangerous to tenants?  Between 2005 and 2008 Fingal alone spent €8.1m purchasing Part V social units off developers, and in the ten year period 2002- 2012 over 15,000 Part V houses and apartments built by private developers were purchased by the state.

Calls for drains to be inspected – Independent.ie