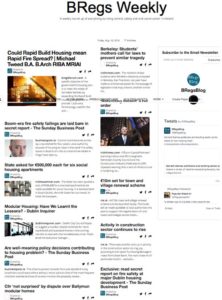 Edition 76 of BRegs Weekly is out now.

This week it was revealed that a Fingal County Council-commissioned probe into fire safety at a major housing estate lay unpublished for four years.  The redacted report featured in an article by Jack Horgan-Jones in the Sunday Business Post and highlights serious fire defects in an estate in Holywell,  Swords.  Local Councillors have accused the County Council of ‘burying its head in the sand’ and questions are asked as to why private owners were not alerted to serious safety concerns 4 years ago when the report was published.  It remains to be seen as to whether an evacuation order will be issued to all residents on foot of publication.

Even as ‘rapid’ timber framed housing is being heavily promoted by Minister Coveney as a solution to the housing crisis, there are still unanswered questions about the first round of rapid-build housing built by Western Building Systems in Ballymun this year. The Dublin Inquirer noted that there has been no cost-benefit analysis explaining how the decision to build rapid-build homes compares to other options (like traditional construction or purchasing existing homes).  The final bill for the housing in Poppintree, Ballymun has yet to be decided- the contract is in dispute and an arbitrator will agree what the final cost.  It also emerged that the Office for Public Works is currently involved in legal proceedings that relate to Whitehall College of Further Education, designed and built by Western Building Systems.

Michael Tweed MRIAI explored the technical difficulties in building ‘Rapid’ homes in timber frame and suggested that our regulatory and inspection regimes are not adequate in preventing poorly constructed timber framed housing.

The Irish Examiner highlighted deficiencies in our new revised Part V social housing provision , revised in 2015.  It was revealed that the state will have to pay o€3.5m for 6 social apartments, over €670,000 per two bed apartment, in a scheme in Oatlands College, Mount Merrion. According to the developer Balark Investments Ltd., Department of the Environment guidelines have been fully complied with in calculating the costs.  Part V Social Housing guidelines were revised in 2015 to ensure 10% of all housing in schemes of 10 units or more was made available in a scheme’s specific location for purchase at ‘discounted’ levels to Local Authorities. Unfortunately previous flexibility regarding the location and nature of the Part V contributions (e.g. cash in lieu of units) was removed at this time and the result may well be expensive units located in luxury developments such as this example, at a very high price.