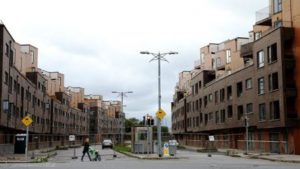 In 2014 Taoiseach Enda Kenny vowed to crack down on cowboy developers: “…we have to stand up and confront the major deficiencies in the sector that tolerated poor standards through a weak regulatory and enforcement regime… We will not tolerate any more Priory Halls or pyrite housing estates…… Nobody wants to go back to the bad old days of the construction and property boom” (see Journal.ie article here).

Plans to sell refurbished apartments in the infamous Priory Hall development were announced last week (see Journal article here).  Out of the 187 apartments in Priory Hall 127 are owned by State with the remainder in private ownership.  The first phase of refurbished units has now been completed and Dublin City Council plans to retain 9 and sell 51. The Council already own 35 units which will stay in their ownership.

The original estimate for refurbishment works was €10m.  The final cost is over 3x this amount or a staggering €178,600 per unit.  Part of the large cost was rents paid for by Dublin City Council to house existing tenants resultant from a High Court case brought  by owners.

It would have cost the same to demolish the scheme and rebuild rather than refurbish.

The following Journal.ie article “Explainer: What is happening with Priory Hall?” from 2013 gives a useful synopsis of the history of the Piory Hall “…An emblem of the boom-and-bust of Ireland’s property market, the Donaghmede complex tells a complicated story of regulation (or lack thereof), intertwined with a mortgage arrears problem and, devastatingly, a suicide crisis.”

The complex was declared a fire hazard and an evacuation order had to be sought by the High Court back in October 2011. All 256 residents had to leave the complex, then numerous legal battles ensued with developer Tom McFeely.  Finally, the residents and the Local Authority were in court over who paid the bill for their temporary accommodation.  A long and costly route to redress for defects at a huge financial and personal cost to owners.

Priory Hall was cited as one of the main reasons for the subsequent introduction of new Building Control Amendment Regulations in 2014, BCAR SI.9.  Widespread criticism, notably from within the architectural profession, that this would offer no real protection for buyers was blithely dismissed by Mr Hogan, who continued to insist that his light-touch approach “will provide consumers with the protection they need and deserve” (see post here).

Onerous BCAR administrative procedures costing over €25,000 per apartment and are having a negative effect on feasibility of residential projects across the board (see post here).  A 60% fall-off in once-off housing commencements was recorded in the first 12 months of operation of BCAR and following Ministerial review, an ‘opt-out’ from BCAR procedures was introduced in September 2015 for single houses and larger residential extensions (see post here).  There was no Regulatory Impact Assessment done in advance of implementation of BCAR SI9.

The Irish system of building control is unique and remains 100% privatised; developers employ private sector professionals or firms directly who certify buildings as compliant on completion. This is very similar the older ‘self-certification’ system introduced in 1992 that applied to Priory Hall when it was built in 2007.  Certifiers can still be employees of limited companies contracted to developers (see post here).

When BCAR SI9 was introduced in 2014 it was called “reinforced self-certification” by former Minister Phil Hogan.  Lack of enforcement of standards by Local Authority Building Control means that the system is still subject to undue influence by developers and standards have not improved as a result. The state still employs less than 70 building control inspectors nationwide for a €12Bn- Nationwide there are more dog wardens employed in Local Authorities (see post here).

Remarkably the State has yet to meet their own obligations and there are still no additional measures in place to stop pyrite entering the supply chain in the construction sector.  Under the Construction Products Regulations, S.I. No. 225 of 2013, the Department of the Environment itself must undertake market surveillance measures in respect of construction aggregates and are answerable to Brussels.  Monitoring and policing of the materials sector is not a function of certifiers or professionals (see post here).

Priory Hall has set the template for other owners of defective homes- problems emerge, tenants and owners escalate issues, Local Authorities deflect blame and ignore, owners escalate and initiate legal proceedings. Developers, builders and professionals involved may have liquidated companies, gone out of business or simply moved abroad by this stage so Invariably the state picks up the tab (see post here).

Residents of Longboat Quay, another defective apartment scheme in Dublin, learned the lesson from Priory Hall there is little advantage in waiting for Local Authorities to act.  Residents here are in the middle of an effective public campaign to have their own building defects brought to a swift resolution by the State (see Dublin Inquirer article here).

It would appear that frequently Local Authorities ‘put their head in the sand” on defective building problems issues, prefer to leave residents live in defective homes rather than act or make them aware of serious safety issues.  Last month an alarming story emerged about a fire report commissioned in 2012 by Fingal County Council  which was never published.   Although remedial work was carried out by the Local Authority to make 55 Local Authority homes safe, tenants and residents were not made aware of the dangerous state the units were in at the time and were not evacuated.  Repairs appear to have been made when Local Authority units became void and in a piecemeal basis (see Sunday Business Post article here).

Private owners in the Holywell estate are now only becoming aware of significant safety concerns they have unwittingly lived with for many years and it remains to be seen if an evacuation order will be sought now these issues have become public.

In 2015 Millfield Manor in Kildare saw 6 terraced houses burn down in less than half an hour.  Over one year later residents are awaiting publication of a report commissioned by the Department of Evironment and Local Authority into defects in this estate (see post here).

How many more “Priory Halls”?

In 2015 the Taoiseach said  “I don’t know how many Priory Halls & Longboat Quays are out there, I’m convinced there are others” and Ministers suggested that problems similar to those in Priory Hall may be widespread (see Dáil discussion here).  There are at least 30 high profile cases in the public realm of major defective residential schemes in the country.   Most of these are at various points along the ‘Priory Hall journey’- most will invariably end up seeking resolution not from those responsible (who may be made of ‘straw’) but from the State.

If Priory Hall is the template, the taxpayer is facing bills for hundreds of millions of euros for defective schemes built during the boom all across the country.  Our current system of Building Control remains largely unchanged, more expensive, and as ineffective for owners as ever.  Expect more defective projects to emerge (see post here).

The cost to roll out a proper 100% independent system of building control operated by the state?  Northern Ireland operates an effective and 100% independent system of Local Authority Building Control inspections, with 40 building control inspectors with very modest fees and costs.  The cost for a typical apartment for similar compliances is just €270, less than 1/100 the cost of our current system in the republic (see post here) .  The NI system is entirely self-funded from fees charged and has been proposed as a cost-efficient and highly effective alternative by respected industry experts (see post here).

Despite experience to date the State continues with a unique (and expensive) ‘hands-off’ system of building control where responsibility for building standards remains directly under the control of developers.