In the Irish Times today “Housing crisis: Modular homes delayed until 2017” Dublin City Council (DCC) have confirmed that 131 ‘rapid’ houses  promised for completion this year will not be delivered until 2017.  The delay comes despite recent claims from Minister Simon Coveney that Drimnagh and Darndale units were to be completed before year-end.  DCC’s executive housing manager Tony Flynn said the original time scales had not been realistic and said the council had made it clear to the Government there was “no point” in seeking to complete projects in a timescale which suppliers could not meet.

Last week Minister Coveney announced 1,500 rapid-build units would be delivered by 2018, 200 of which would be in place by the end of this year. So far in Dublin only 22 have been provided.  Despite widespread criticism the Department of Housing, Planning, Community and Local Government (DHPCLG) is pressing ahead with the roll-out of more ‘rapid’ building projects.

Cost-Benefit of ‘Rapid’ vs permanent homes?

The cost of the proposed ‘Rapid’ units is likely to be similar to the tendered cost of €243k excluding Vat previous completed units in Poppintree, Ballymun completed in May 2016 (pictured above).  The completed Ballymun project has been widely criticised as being more expensive than existing permanent homes for sale in the same location. A similar development of ‘stackable’ apartments planned for the city cost £150 (€170,000) per unit in London, excluding site and other costs.

It is surprising that the Government are spending this amount on building while cheaper apartments are available for sale.  In December 2015 Iris Reit purchased 442 permanent completed apartments in a mixed use scheme in Tallaght Cross, Dublin from NAMA (see here). The cost was just €100,0000 per unit (net of the commercial element) and apartments in this impressive development are now available to rent (see here). 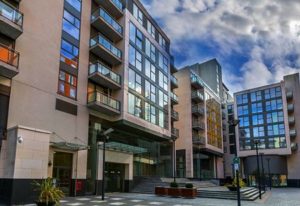 No proper cost-benefit analysis has been published for ‘rapid’ housing proposals by the DHPCLG on the viability of ‘rapid’ housing plans.  The overall cost of new ‘rapid’ prefab units in some locations are twice the price of existing homes for sale locally.  Meanwhile these delays mean that homeless families remain in emergency accommodation and expensive hotel rooms have to be paid for another year.  Extract off a Broadsheet.ie article, 13 April 2016 (see here):

The original contract figure [For Poppintree units], agreed by DCC and the Department of the Environment, of €5,340,775.00 for the 22 houses equates to a cost of €242,762.50 per house.  This figures excludes any site purchase cost, planning application costs, development levies, or developer’s profits. Comparable, index construction costs are €100,000 – €140,000 for this type of social housing… Although we are not aware of site costs in Ballymun, 29 ‘rapid’ units are planned for a site in Drimnagh which was purchased by DCC for €3.5m. This suggests a per unit site cost of €120,000, and eventual total cost including site of over €360,000 per temporary unit.

This next phase of tenders appear to be PPP “turnkey” design-and-build, traditionally a very expensive way to procure housing.  Under the Irish Building Control system successful tenderers will self-certify, control quality, inspections on site and certification of compliance with building regulations- all without independent inspections.

Lessons have not been learned from ‘rapid’ delivery schools, which have given very poor results.  In Lusk, Co Dublin serious defects in a ‘rapid’ constructed modular school were detected following on from an Architect’s audit of fire safety commissioned by the school in 2014. Subsequently in 2015, €800,000 was spent by the state on remediating defects. Following public pressure an audit of 6 schools (completed by the Irish contractor) was undertaken in 2015 (see here).  From Broadsheet.ie:

The quality control and safety checks in the Ballymun housing is controlled by the contractor, because that is the way that DCC has set it up.  The houses will be inspected and certified privately by people engaged by the builder. The rapid build school that had fire safety problems was built by the same company that is providing the rapid houses in Ballymun.  Our current system of ‘reinforced self-certification’ is just that – self-certification by contractors of their own work with no independent oversight.  Recent experience of defective ‘rapid’ build schools suggests that in the event of a defect later on the state, remarkably, will bear the costs of repairs.

The Irish case is in marked contrast to the UK example, pupils still in attendance at all schools subject to ongoing audit for over a year, the report has yet to be published.  Schools defects and building failures have been in the media both here and in the UK. In Edinburgh two Public Private Partnership (PPP) schools suffered partial wall collapses and 17 schools build by the same contractor were immediately evacuated pending audit (see here).

Financing for social housing appears similar to that used in the ‘rapid’ schools programme- the Public Private Partnership (PPP) model. In the UK, decades of expensive public sector PPP projects has left debts of over x5 initial capital costs.  Commentators such as Rory Hearne have been critical of this type of procurement in Ireland when it has applied to social projects such as housing, schools and hospitals (see Combat Poverty Agency “Origins, Development and Outcomes of Public Private Partnerships in Ireland: The Case of PPPs in Social Housing Regeneration:” by Dr Rory Hearne 2007).

The suitability of timber frame construction such as used in ‘rapid’ builds for multi-unit housing has been called into question. Recent experiences in Millfield Manor where 6 timber framed terraced houses burnt down in 20 minutes have raised alarm bells in Ireland (see here).

Last month it was revealed in the media that a damning fire report commissioned in 2012 by Fingal County Council into fire problems in Holywell in Swords was never published.  Although remedial work was carried out by the Local Authority to make 55 homes safe, Local Authority tenants were not made aware of the dangerous state the units were in.  They were not evacuated and repairs were made only when units became void.

It would appear that the Local Authority ‘put their head in the sand’ on safety problems and continue to  leave tenants and owners live in dangerous homes rather than act or make them aware of the serious safety issues (see here).  It is unclear what action residents will now take against the Local Authority.  Dwellings examined in the report were of timber frame construction.

Fire Safety and the UK experience

Safety in timber framed structures has been a live issue in the UK for some years. In 2010 the BBC examined evidence that a fire test undertaken for the UK Timber Frame Association by the BRE was misreported a year earlier, and used to relax older building regulations relating to the use of timber in apartment buildings (see “Timber framed buildings ‘fire risk’ despite safety test” BBC News). Extract:

In light of the BBC’s findings, Brian Coleman, chairman of the London Fire Authority, said: “I have always been a stern critic of high rise timber framed buildings having seen in my own area the results of a blaze.  “Sadly, these days developers looking to build things quicker and cheaper have resorted to timber. Supporters of timber frame buildings say once they’re built they’re completely safe. But we know people drill holes in walls which damages the building fabric and allows the timber to become exposed.”

By 2003 when the report was corrected it was too late to curtail the proliferation of what may be seen now as inappropriate construction methods for multi-unit housing.  A recent court case in Wales in 2016 suggests that where inexperienced builders or ‘casual’ building methods are used in construction that requires exacting workmanship, poor outcomes are inevitable- extract from “Timber-frame house-builder fined £100k for fire hazards” Construction Index 7th September 2016:

“The Health & Safety Executive launched an investigation on 27th July 2016 after making an unannounced visit to inspect a building site run by JG Hale Construction Ltd in the centre of Blaenavon.  Cwmbran Magistrates’ Court heard that 54 timber-frame houses were under construction, but with inadequate management of fire risk.  The HSE found that measures to prevent a fire starting and getting out of control had not been properly taken. All the houses were under construction at broadly the same stage with little fire protection, a lack of site management control, insufficient means to detect a fire and raise the alarm, poor control of ignition sources and a general lack of emergency planning.”

Where exacting construction materials and details are used, site inspection and quality control are of the utmost importance to occupant safety.  In design-and-build contracts the developer/contractor is in control the entire process and directly employs professionals to ‘self-certify’ quality and compliance.

Under regulations introduced in 2014 by Former Minister Phil Hogan  responsibility for compliance buth Building Regulations resides with a private individual not the state, the Assigned Certifier. However this professional can be a direct employee of the developer.  From Broadsheet.ie:

The Certificate of Compliance and Completion from the Assigned Certifier is thought by some to be a guarantee. DCC Tender documents require the builder to sign-off on all statutory regulations.  This is of concern as it suggests no independent oversight or inspections of the quality and safety of the units provided.

Experience in Millfield Manor, Longboat Quay along with many other developer-led residential projects suggest that allowing developers to control the procurement process and employ certifiers directly, without any independent state inspections or adequate enforcement, will lead to poor quality and in some cases hazardous construction (see here).  ‘Self Regulation’ has failed citizens repeatedly and the current BCAR SI9 system of ‘reinforced self-certification’ does little to address these issues.  Given the history of Priory Hall and more recent examples, it beggars belief that the Government is set on a housing initiative that favours developers who build quicker and cheaper, with little or no independent inspection or oversight.

All you need to know about ‘modular’ housing | ‘Rapid Answers’ Broadsheet.ie

Is it more expensive to build than to buy? | Housing Crisis 2016

Other information on Rapid Tenders:

The Office of Government Procurement has invited tenders for appointment to a select panel (‘framework’) of up to 20 tenderers (‘framework members’). One successful tenderer will be selected for an initial contract for design and construction of 20 units at Wellview, Mulhuddart in Dublin 15 (the initial contract).  Following this more tenders will follow for a planned 1,700 ‘rapid’ delivery houses with a value ex vat of €243k per unit over coming years. Deadline for responses is on 30th September 2016. Tenders are for  ‘design and build’  and includes ‘self-certification’ BC(A)R SI.9 sign-off by developers of their own work (for more details see here).

A Bidders briefing session will be held on the 7 of September in Cork at 2pm and the 8 September in Dublin at 11am. As places are limited to attend a briefing session, Tenderers should register by sending an email outlining the names of the individuals attending and the company they are representing to the following address: rapiddeliverytender@ogp.gov.ie

2 thoughts on “Is ‘Rapid’ housing too little, too late (again)?”