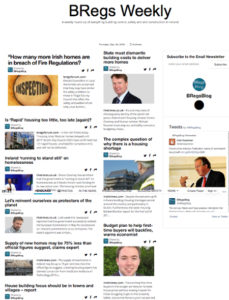 Edition 83 of BRegs Weekly is out now.

A number of construction and housing experts gathered at the Dublin Economics Workshop annual policy conference in Waterford.

Dr Ronan Lyons suggested that proposed budgetary stimulus measures aimed at first-time buyers are likely to increase house prices without making it easier for those struggling to get on the property ladder.  He said the current supply shortage was primarily a function of high construction costs and could be not be addressed by demand-side measures.   He said the Central Bank’s rules, which are currently under review, have had a positive effect in anchoring demand for housing.  Dr Lyons has previously been critical of the high cost of compliance with building regulations.

Professor Lorcan Sirr confirmed that residential completion data issued by the Department of Housing, Planning and Local Government is inaccurate and has flattered output and underestimated housing need for years; “the supply of new homes in Ireland may be up to 75 % less than the official figures suggest”.  He said said while 12,666 new homes were completed last year the State’s housing stock according to the Department, when measured by the Central Statistics Office, the increase was just 6,282. The real increase in the State’s housing stock may have been as low as 3,738 in 2015.

Elsewhere Dr Rory Hearne called the housing and homeless crisis “a national emergency” and predicted at the current rate of families becoming homeless there will be more than 6,000 children in emergency accommodation by 2017.  He suggests the current crisis results from decades of housing policy which treated housing primarily as a commodity and speculative investment asset, with current analysis and discussion focused on how to incentivise the property industry to build more housing stock.  Dr Hearne noted there is 2,233 hectares of zoned land in the wider Dublin region which could provide 102,500 new housing units at the moment.  He suggested that policy needs to treat housing as a social necessity and a human right, not a speculative investment asset or commodity” and is an advocates large-scale state intervention in the housing sector.