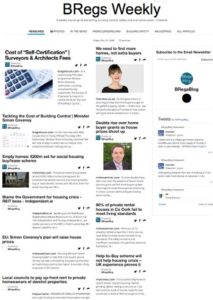 Edition 85 of BRegs Weekly is out now.

A Fingal County Council public meeting was scheduled for this week to discuss an unpublished fire safety report into the Holywell estate in Swords.  Council management had been asked to explain why it failed to take legal action against the Holywell estate’s developers within the five year time limit after the council discovered fire safety defects in the estate in 2007.  The County Council sat on this information for years and the report was never officially published.  Councillor Jimmy Guerin (Independent) tabled a motion to have the Council meeting held in private due to a risk to the value of homes in certain estates.  The meeting went on for some time but was suspended until November after Cllr Paul Mulville (Independent) pointed out that the vote to hold the meeting in private breached the Local Government Act.  Although some remedial works to a small number of Local Authority controlled homes were completed on a piecemeal basis as voids occurred, many more residents continue to live in non-compliant and potentially dangerous homes.

Despite the very poor track record of PPP delivered ‘Rapid’ schools building programme from 2007 onwards, Budget 2016 announced capital spending on schools at 14%, more than the planned capital spending for housing for the period 2016- 2021.  The Department of Education have yet to release a safety audit completed last year into 6 schools completed by the same contractor.  Significant fire safety issues emerged in 2015 in an Educate Together school  in Lusk, built 10 years ago by this contractor.  Subsequently €800,000 was spent by the state to make the school safe.  The audit was completed last year but we are still waiting on the state to publish the report into the safety of these ‘RAPID’ build schools.  Teachers union TUI have called for a national audit of fire safety in schools.

Housing Minister Coveney’s first time buyer’s grant launched in the Budget this week has come under fire in the media with accusations that the measure has succeeded in driving up house prices by as much as €45,000 overnight.  Minister Coveney’ initiative was roundly criticised prior to its introduction by industry experts and also by the EU as being ‘inflationary’.  The Construction Industry Federation (CIF) and some private developers have defended the government’s new first-time buyers scheme.  Media have reported on significant increases in prices of housing in new schemes on and after the budget announcement in various locations.