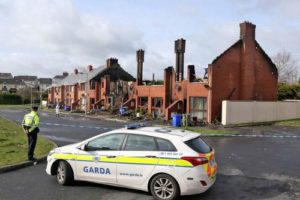 A follow-up story by the Sunday Business Post last weekend “Fingal knew of Holywell fire fears in 2007” confirmed that Fingal County Council were made aware of significant fire safety defects in homes in Hollywell as far back as 2007.  A fire in January of that year revealed that there was no fire-stopping between dwellings at the estate: Dublin Fire Brigade sent an incident report to the Local Authority following the fire.  In April 2007 the Department of the Environment wrote to Fingal County Council outlining concerns and requested a full analysis be undertaken.  By June Fingal had responded that “Our inspectors have very serious concerns about the specifications and quality of workmanship to the premesis. These matters go beyond the question of completion and raise ussues of the basic acceptability of the property”. Later correspondence in August noted that inspections had all reported serious breaches of fire safety requirements. In September 2007 the developer had “asserted that their construction complied with the Building Control Regulations. As per their obligations the developer’s agent certified the compliance of this development with the Building Control Act”.

It took Fingal County Council 5 years to commission an independent fire report which was never made public- rather it was published by the Sunday Business Post in August 2016 after a freedom of information request by the newspaper (see article Here). This report identified serious breaches of fire regulations in the Holywell development and examined typical apartments at ground, first and second floor level (see report  Here).  Although remedial work was carried out by the Local Authority to make 55 homes safe, at a cost of up to €20,000 per apartment, Local Authority tenants were not made aware of the dangerous state the units were in at the time and were not evacuated.  Repairs appear to have been made when units became void and in a piecemeal basis.  Defects identified in the report relate to ‘typical’ dwellings and may affect not just Local Authority tenants but hundreds of homes owned privately.

Local Councillors are currently asking why Fingal County Council has ’buried its head in the sand’ on potentially fatal defects for over 12 years, and what they are going to do now.  Owners are still left living in fear of a potentially fatal fire safety event.

Earlier this year the Examiner examined several high profile defective developments including Longboat Quay and Millfield Manor, Newbridge and some less well-known developments, Ath Lethan, Dundalk and Ceol na Mara, Waterford (see post Here) . The Examiner reported on how a freedom of information request from the Irish Examiner uncovered one of what could be dozens of examples of estates with fire safety defects which were quietly rectified, often from the public purse, without any publicity. The Irish Examiner understands it was deemed necessary for the council to pay for the work on private homes for reasons of access to the council owned properties within mixed private and social housing schemes.

In Millfield Manor (pictured) 6 homes burnt down in 20 minutes. Under pressure presure from local residents the Local Authority and Department of the Environment commissioned an independent report into fire safety in the estate- again this report has yet to be published, over one year on.  Owners have not been evacuated.

Housing is ‘the number one priority for government’ and it’s time to ask how many other similar developments are seriously defective in the country.  In the ten year period 2002- 2012 over 15,000 Part V houses and apartments built by private developers were purchased by the state.  Why do Local Authorities continue to observe a ‘hands-off’ privatised system of self-certification by developers which has little or no consumer protection? Will the Government’s ambitious housing programme not be subject to independent inspection?

Calls for drains to be inspected – Independent.ie