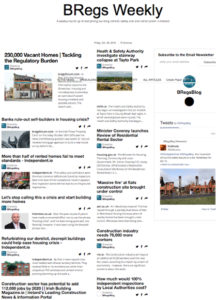 Edition 87 of BRegs Weekly is out now.

Tthe Independent’s Paul Melia published a report by a local government watchdog which said that the current system of inspecting homes is not fit for purpose, and is “not having a sufficient impact” in bringing unscrupulous landlords to task.  The National Oversight and Audit Commission (NOAC) report confirmed more than half of private rented homes are failing to meet basic standards because of fire safety and ventilation issues.  Of the 15,000 private dwellings inspected in 2014, 55% failed to meet the necessary standards:  “Fire safety and ventilation were the most common deficiencies found by inspectors. Given the level of non-compliance noted it appears that inspection alone will not lead to on the ground improvements.”  The report drew on data supplied by each of the country’s 31 local authorities.  Criticising the quality of the information, the NOAC said the overall findings suggested the current inspection process was “not having a sufficient impact on the standard of rental accommodation”.

Articles this week suggested refurbishing the existing 230,000 vacant homes in a effort to ease the housing crisis.  The BRegs blog republished a May 2016 the Housing Agency submission to the Oireachtas Housing and Homelessness Committee which gave a good overview of vacant housing in Ireland.  One of the major problems facing mixed-use vacant buildings is the ‘Regulatory Burden’, the time, professional fees and complex statutory permission process and costs that owners face when undertaking even modest refurbishment projects.  A paper by two RIAI Past Presidents, Michael Collins and Eoin O’Cofaigh, catalogued the complexity of current legislation and regulation that currently applies to construction: “…a private householder might have to bring a 500 sq. foot house extension through 27 statutory steps before occupying it…”.  The authors proposed a workable simplified system of independent building control inspections as an effective, self-financing alternative.

A BRegs blog ‘Fact-check’ post this week noted that the insistence by some lending institutions on BCAR SI.9 procedures being applied to once-off exempt projects was as a result of lobbying by industry vested interests.  Self-builders have gone so far to suggest that BCAR SI.9 has created a state-sponsored monopoly, one that excludes owners from managing projects and limits the supply of new house building.  Like many senior industry figures and commentators, self-builders have consistently called for an independent and affordable system of building inspection which would reduce costs and offer reasonable reassurance right across the house bulding sector.