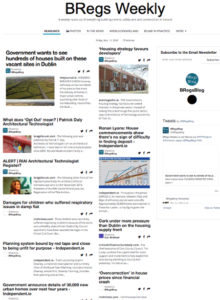 Edition 89 of BRegs Weekly is out now.

The national housing charity Threshold, this week reported a 26% rise nationally in the number of tenants seeking advice and support for rent reviews in the past year, which according to the charity is pushing families to the brink of homelessness and the Government must act immediately to address this nationwide challenge. According to the charity, the dramatic increases in rents in recent months is putting many at risk of homelessness with rents increasing by an alarming of 11.7% between July and September – the biggest yearly increase recorded by the Daft.ie report since its inception in 2002.

Minister Simon Coveney’s housing strategy has come under sustained fire from economists.  Dr Tom O’Connor, an economist with Cork Institute of Technology, says that Government policies have favoured vested private sector interests, instead of solving the crisis through the public sector.  “They are hoping that the developers are going to pull us out of the crisis, when the developers are saying that they aren’t making enough profit,” he said.  Echoing recommendations of the all-party Oireachtas Committee on Homelessness and Housing report from early this year, Mr O’Connor said that the Government could set up a semi-state company to borrow billions of euro from the European Investment Bank, which would keep the money off the national debt.  He said that public housing associations could then build more than 100,000 units, which would remain within the public sector and could be rented out on a not-for-profit basis, taking account of people’s incomes to set rent levels.  He said that this model had worked well in Austria and Germany, helped promote social inclusion, by eliminating barriers between private renters and social-housing renters, and would also create jobs.