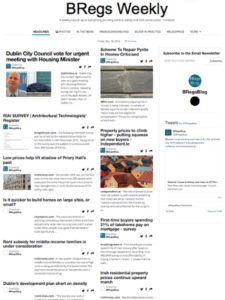 Edition 90 of BRegs Weekly is out now.

Over 11,000 Pyrite affected homeowners were given a shock this week when the Government announced stricter qualification criteria for the 2013 Pyrite Remediation Scheme.  Now, over 10,000 affected owners will not be eligible for compensation.  The pyrite compensation scheme was set up to deal with structural damage in homes built with the mineral.  The pyrite resolution board estimates that fewer than 1000 cases will now qualify due to new testing standards.  Householders says they can’t sell their properties but also can’t qualify for compensation to repair their homes.  Local Authorities are designated by the EU as being responsible for inspection of the construction materials sector.  Remarkably no additional resources have been put in place to address this problem.  Thousands of homes in Dublin and the commuter belt have been affected with subsidence and cracks due to poor policing by the State of quarries.

On October 20th, five years to the day since more than 250 people were evacuated from the Priory Hall apartment scheme near Donaghmede in north Dublin because of fire safety risks, apartments in “New Priory” were put up for sale.  With an average sale price of just €162,000, the total build costs for repairs are set to be 3x more than the original estimate by former Minister Phil Hogan in 2014.  Dublin City Council have earmarked a further €22.6m on top of monies spent to date in their 2017-2017 budget for further repair work.  Total costs to date for the remediation works have not been published.

No end in sight for renters and vulnerable homeless families in emergency accomodation. With rents set to increase by +10% per annum for the foreseeable future, supply continues to be sluggish.  One factor in the current unusually high vacant rates for existing buildings is the ‘heavy hand of regulation’.  Administrative building control procedures introduced in 2014, BCAR SI.9, are adding up to 40% to costs.  Dublin with an acute housing need, has a vacancy rate of 8.2% at present: studies in the UK suggest a 2.5% vacancy rate would be a ‘natural level’ of vacancy.