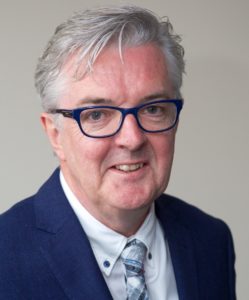 As a former British Prime Minister Benjamin Disraeli said: “There are three kinds of lies: lies, damned lies, and statistics.” Statistics are often gleaned from surveys and it will be interesting to see what the results will be from the latest attempt by the RIAI to assess how its members will react to proposals to incorporate Architectural Technologists within a Statutory Register of Architectural Technologists with the possibility to undertake the role of Assigned Certifiers.

Many industry observers are surprised that the RIAI seems reluctant to support the admission of Architectural Technologists to this august group of Assigned Certifiers when the RIAI seemed to have no problem with Building Surveyors or any kind of engineer including telephone engineers being admitted. Is it that many architects remain threatened by the advances being made by many architectural technologists with many being leaders in the areas of sustainability and BIM?

As someone who is qualified as both an Architectural Technologist and as an Architect I have never grasped the confusion about the respective qualifications. During my career, I have met some outstanding professionals and some less so with either of these qualifications. I have tended to assess individuals on their merits and their contributions to a project or company.

A view could be taken that the survey is skewed towards an agenda and result. It covers areas not within the remit of the RIAI. Whether this is by accident or design is unclear as it is not known whether the survey was prepared by an outside company or by staff members at the architects’ institute.

The answers suggested for Question No. 4 appear to expose an unconscious bias: 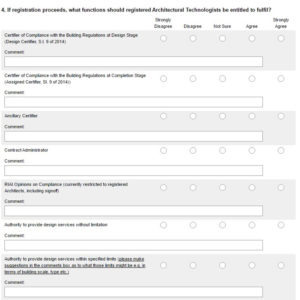 Question 4: “If registration proceeds, what functions should registered Architectural Technologists be entitled to fulfil?”

Whoever prepared the survey question choices does not seem to realise that Architectural Technologists are already acting as Contract Administrators. The RIAI does not control the commercial market or any contractual arrangements. Such an attempt would be illegal and the RIAI must know this although whoever drew up the survey clearly does not.

Authority to provide design services without limitation / within specified limits?

There is no protection of the ‘function’ of architects e.g. designing buildings. There is merely a protection of the use of the title ‘Architect’ and the maintenance of a Register of those permitted to use the title. Protection of function is a ‘red herring’ and not relevant to this discussion. It could be interpreted as protectionist and scare-mongering to members however, and the optics are not positive. If intended the question suggests a lack of professionalism, self-awareness and vision.

The survey omits the choice that there is an alternative body, the Chartered Institute of Architectural Technologists (CIAT) that could act as the registration body and that this has been an option on the table for many years. It is also my understanding that the CIAT and RIAI are co-operating with the Department of Housing, Planning, Community and Local Government and are working together on a joint endeavour to create a single CIAT/ RIAI statutory register for approval by their respective boards and members.

Vivian Cummins is an architect in private practice in Athy and President of the North Kildare Chamber of Commerce. He was an RIAI Council member in 2014. He has addressed national conferences and commented extensively in print and broadcast media on housing, planning and building regulatory matters.

The above post is an opinion piece only and is not intended as an advice note or substitute for independent legal advice. Readers should obtain professional advice in relation to any matter raised from their professional bodies or consultants before relying on any information contained therein.