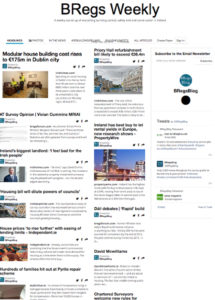 Edition 91 of BRegs Weekly is out now.

Ireland’s unique system of self-certification has resulted in major defective residential and commercial projects, some requiring significant and costly remedial works.  Perhaps the most notorious of these is Priory Hall.  In 2013 the Dublin City Council agreed to take over the complex and refurbish it at a cost of €10 million, confirmed by former Minister Phil Hogan.  However, when work began in mid-2014 it emerged far more extensive reconstruction was needed and costs rose.  New figures show that the remedial works are now expected to reach €36.4 million.  This excludes the cost of temporarily housing the 187 residents for 5 years, state-owned lending institutions write-downs of original mortgages and legal costs.  These additional items may bring the total cost of Priory Hall to over €80m.  More than 30 similar large scale defective residential developments are known to exist at present.  Taxpayers, owners and industry will be paying dearly, both financially and personally, for the state’s ‘hands-off’ approach to building control and continued reliance under BC(A)R SI.9 of developers employees certifying the quality of speculative developments.

Local Authorities are designated by the EU as being responsible for inspection of the materials sector, however no additional resources have been put in place to inspect for pyrite. Thousands of homes in Dublin and the commuter belt remain affected due to poor policing by the State of quarries.  Owners affected have criticised stricter Government qualification criteria for the 2013 Pyrite Remediation Scheme and over 10,000 affected owners will not be eligible for compensation.  The pyrite resolution board estimates that less than 1,000 cases will qualify for the repairs scheme due to new testing standards.  It is based on a scoring system that judges on the severity of damage rather than damage being present.  To now qualify, properties must be assessed as having “significant” pyrite damage, however the majority of properties are homes where pyrite may be present but has yet to cause this level of structural damage.  Householders now feel they can’t sell their properties but also can’t qualify for compensation to repair their homes.

The BRegs Blog quietly celebrated it’s 3rd anniversary this week.  Many thanks to all Blog contributors and especially the +500,000 readers who continue to make the BRegs Blog the No 1 ‘go to’ resource for anyone interested in Building Control in Ireland.