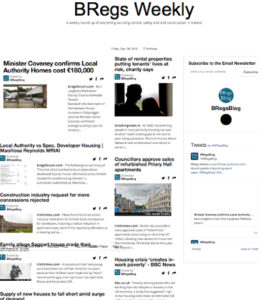 Edition 93 of BRegs Weekly is out now.

Pleas from the Construction Industry Federation (CIF) for further State concessions for developers, including a radical reduction in apartment sizes, were firmly rejected by Ministers at a meeting last week.  CIF representatives Hubert Fitzpatrick and Tom Parlon, a former Progressive Democrats junior minister for finance, argued for smaller apartments, similar to the standards that apply in the UK. This would be in addition to changes made to apartment standards by the last government.  The CIF advocated a further expansion of the Help to Buy scheme announced in the budget.  Ministers present reacted angrily and outlined increased State funding and measures to help boost the supply of housing and challenged the CIF about what the building industry is doing.  “The State has thrown the kitchen sink at this over the past 18 months to two years”

In a Dáil exchange this week Minister Simon Coveney confirmed average costs for conventional Local Authority directly procured social housing.  Local Authority 3 bed homes cost an average of €180,000 (incl VAT), almost half the price of the Society of the Surveyors of Chartered Surveyors Ireland (SCSI) cost estimate of a typical developer-led house of €330,493 (incl VAT).  Minister Coveney’s confirmed costs are also significantly lower than ‘rapid’ units planned which are budgeted for €243,000 (incl VAT) per unit.  ‘Rapid’ builds take the same length of time as conventional homes to complete.  The rationale behind the State opting for a slower and significantly more expensive housing method of construction are unclear.

More defective schemes emerge this week. A couple and their two young sons have been out of their home at Hillrace Crescent, Saggart, Co Dublin for six years because their children were made sick by “toxic” mould and fungus, the High Court has been told.  Shane and Antoinette O’Reilly bought  in 2005 and claim the property had many defects which were not rectified, including condensation, mould and fungus growth caused by poor ventilation in the attic and bedrooms.  This led to their two young sons, now aged seven and nine, developing respiratory infections, they claim. On receiving medical advice they left the property in 2010 and have been living in rented accommodation since.  They have sued the builders and developer of the property for damages over alleged negligence and breach of duty.  The defendants deny the claims and plead they made an open offer to repair anything that might be wrong with the property but that was refused by the plaintiffs.  Efforts to mediate the dispute did not succeed, the court also heard.

An NGO representing people in local authority housing, Community Action Network, has said tenants’ health is being put at risk due to poor living standards.  They said condensation and damp in social housing has led to serious illness among its members.  Spokesperson Cecilia Forrestal outlined the case of one woman who was given a flat after being homeless for a number of years, saying: “Within a couple of months of arriving in the flat, she noticed there was a lot of condensation and mould growth…Within a couple of months, her children began to be ill. Now two years later she has a two-year-old who has been hospitalised a few times and just recently had bronchial pneumonia. She herself has had pleurisy.”