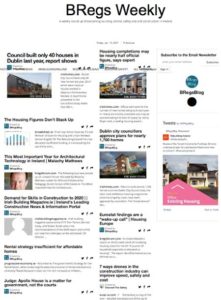 Edition 95 of BRegs Weekly is out now.

Happy new year and we start off where we left off- in Housing Crisis mode.  The accuracy of official reporting of housing data was in question this week.

The Rebuilding Ireland Plan has allocated insufficient funding, is manipulating the use of the term ‘social housing’ and misleading people with its promises says Dr Rory Hearne in Broadsheet.ie this week.  “Rebuilding Ireland is a fundamentally flawed plan as it driven more by an ideological aversion to the state building affordable homes than evidence-based policy solutions based on meeting the housing needs and right to housing for people.”  Dr Hearne considers the Plan is based on the taxpayer incentivising and subsidising the private construction industry and private speculative finance through the various private rental social housing schemes, the ‘help-to-buy’ subsidy, REIT tax breaks, the sell-off and leasing of local authority land to developers and the sale by NAMA at discount of land and property to vulture funds and investors.

The Irish Times suggested that the Department of Housing  may be significantly overstating the actual number of new homes being built.  Official estimates are based on ESB meter connection data, which can be triggered by work to existing buildings or by formerly vacant units coming back on stream.  It appears that Completion figures are being inflated by recently completed but unoccupied National Asset Management Agency developments and by the finishing out of so-called ghost estates, which do not strictly qualify as new homes.  Dr Lorcan Sirr said that while the official figures suggest there were 50,951 housing completions between 2011 and 2016, the actual number of new households recorded by the 2016 census was just 18,981.  Architect Mel Reynolds said the actual level of house completions for 2016, based on stamp duty transactions and an estimate of self-builds, build-to-lets and local-authority construction, was probably closer to 8,000.  This is almost -47% lower than the department’s official estimate of 15,000.