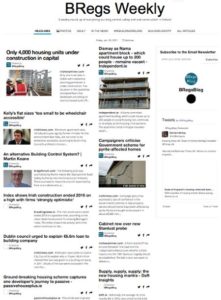 Edition 96 of BRegs Weekly is out now.

Minimum apartment sizes, introduced a year ago by the Department of Housing and former minister for the environment Alan Kelly, are too small to be wheelchair accessible, according to Dublin City Council’s architects’ division.  Mr Kelly had blamed excessive size standards for deterring construction and in December 2015 set new standards.  Deputy city architect Brian Swan said he has attempted to design accessible apartments within the minimum size restrictions, but has been unable to do so.  The chairman of the Dublin City Council’s housing committee, Sinn Féin councillor Daithí Doolan, said the council’s ability to provide accessible homes had been undermined.  “The problem Dublin City Council finds itself in is a direct result of former minister Alan Kelly’s botched proposal to reduce sizes for apartments.”  He said he would be seeking an urgent meeting with Minister for Housing Simon Coveney on the matter.

Moves in Ireland last year sought to mirror the UK trend for reduced space standards with the introduction of widely criticised Minimum Apartment Standards.  In a similar fashion reduced standards have not impacted in any significant way on affordability or housing supply levels here. The Royal Institute of British Architects have dubbed the ability of new UK housing developments that feature communal space and very small living units to skirt planning rules a “scandal”.  Toby Lloyd, policy director at housing charity Shelter, said market pressures – particularly in relation to land values – would immediately absorb any savings from the development of smaller homes;  “People assume that if you make homes smaller it will make them cheaper, but it doesn’t… All it means is that the land-owner can extract more value from the development process.”

Established housebuilders Durkans made the news this week with a scheme of first time buyer homes in Dublin built to the passive standard.   The view expressed by some sections of the industry, including Ministers, that more demanding building standards somehow inhibit construction activity by driving up costs, has no basis in fact.  Patrick Durkan says that the decision to go for such a high spec product in phase two, and a fully passive one in phase three, was market-led.  “The challenge was to work with our financial partners to build something that was really cost-effective but make it as efficient and attractive and saleable as possible…We don’t talk about eco or green or passive. Believe it or not, that’s just a by-product of what we’re marketing.”