Just a few weeks after the first phase of rebuilt Priory Hall residential units went on sale, another legacy defective scheme ‘The Cubes’ in Sandyford is back in the papers.  Some four times the size of Priory Hall, residents learned this week they will face bills of millions of euros for various remedial works.  This is one of over 30 large residential projects known to have significant defects- a list is included at the bottom of the post.  Despite more projects discovered with significant defects, Ireland retains a unique system of self-certification building control with little state oversight of construction.  The BRegs Blog post on this scheme follows from August 2016: 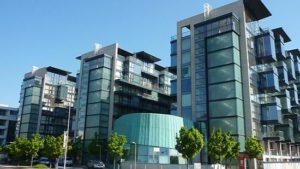 Towards the end of 2015 Taoiseach Enda Kenny said  “I don’t know how many Priory Halls & Longboat Quays are out there, I’m convinced there are others”.  Ministers at the time suggested that problems similar to those in Longboat Quay may be widespread with more defective projects to emerge (see Dáil discussion here).

The list of defective boom-time housing projects got longer this week.  Residents at The Cubes apartment complex in Sandyford in South Dublin are facing bills that could run into the millions to fix problems including mould and damp in their homes.  The Cubes are part of a large apartment complex developed by Paddy Shovlin’s Landmark Developments around 2007.  Many of the apartments were sold off the plans, with prices ranging from €500k up to €1.1m.

They were hailed at the time as luxury, desirable residences, designed around a courtyard.  An article in the Irish Independent this week “U2 stars among 200 investors suing over apartment complex” revealed that 200 investors bought more than they bargained for and have commenced a High Court action over alleged defects at the apartments.  Extract from article:

“One woman said she had been living in the apartment for around eight years, but the problems had only set in recently.  She said: “I have problems with the bathroom with damp and now there’s mould growing. “There are also problems around the windows and with the ventilation.”

Some of the residents said they were tenants with Dún Laoghaire Rathdown County Council or the Circle Voluntary Housing Association, while others owned the apartments or were renting.  The council was also named as one of the prosecuting parties in the case against the developers.

There are more than 600 apartments in the development, however it us understood not all of them have been hit by the alleged defects.

Two engineering firms were employed in May to look into the problems at the apartments, especially those related to the cause of leaks on some of the balconies…

Development loans taken out by Shovlin were taken over by Nama, which appointed Mazars as the receiver of the development. Mazars has in turn appointed Aramark Property to manage the apartments.

When Landmark went into receivership, Nama injected more than €10m extra funding into the scheme.”

This story follows on from an alarming article last weekend in the Sunday Business Post (see link Here) about a fire report commissioned in 2012 by Fingal County Council  which was never published.  Although remedial work was carried out by the Local Authority to make 55 homes safe, Local Authority tenants were not made aware of the dangerous state the units were in at the time and were not evacuated.  The defects, it was suggested, are typical and may well affect many hundreds of units in private ownership.  Owners unwittingly have been living in defective and dangerous properties for years.

With recently announced massive stimulus measures aimed at the private housing sector by Minister Coveney, worryingly the state still has no role in testing compliance with building standards.  Remarkably, Ireland has maintained a unique ‘hands-off’ 100% system of self-certification of building standards, where developers can employ private building inspectors directly.  The spectre of owners seeking redress for defects for years through the courts will be with us for some time to come.