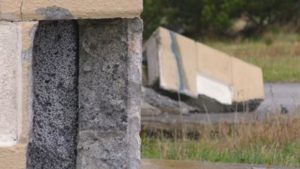 The article  “Our home is crumbling into the ground’: Family in Mayo forced to abandon house”  in Journal.ie highlighted the problems faced by owners of 12,000 homes affected by pyrite and mica.  At an average cost of €64,000 per home to remediate, the state will be paying a high price for not adequately staffing Local Authorities responsible for policing the materials sector.  The BRegs Blog received the following comment from Seamus McDaid:

I spoke on the issue of the crumbling blocks in Donegal last year and I would like to add some further comments on this issue.

I mentioned render and its practices, a lot of people mention building control or the lack of it in Ireland, but in this case it will have no relevance. The point is, architects are specifying a render type that is not suitable for the environment. The purpose of a render is to protect the block work, specifications in the past for render was meant to be taken from standards like B.S 5262:1991. Donegal is designated to be an area of severe exposure and with this a Roughcast, Butter coat with dry dash or a Tyrolean is only recommended. However the majority of problematic crumbling block cases occur with houses having a wood float finish which is recommended for moderate exposure.

As a engineer one has to ask why or what has changed for this type of render to be accepted. When this type of render was used in the past the addition of lime was added and this helped with autogeneous healing, but as admixtures have shelved the use of lime, this movement accommodation contribution is gone. Back to the question what has changed that this render type is now acceptable and the answer is nothing, sand and cement or smooth render doesn’t work in costal areas, it will break down especially now as the historic know how on render practice is lost. Speed is a problem and the lack of knowledge on render practice all contribute to cracking due to various reasons but mainly drying shrinkage and rich brittle cement mixes “for speed”.

Just a simply question should be asked “would you recommend a smooth render house in a place like Malin Head” its madness but at least 85 per cent of the houses constructed there in the last 20 years have smooth render.

The need for movement joints, the NHBC Technical Guidance 6.1/28 January 2016 clearly shows this and Home Bond are advising on this now see technical seminar 5/9/2016. The question is why give advise on them now and what has changed.

Again its not a building control issue but a design and specification issue.

Now at this stage we have water ingress due to the poor render which resulted in capillary cracking which sucks in water at every opportunity which is daily in Donegal. We are now creating the perfect environment for excessive carbonation to occur. We hear on the media of a low cement content or a high aggregate to cement ratio, however this is not present on the inside block which points the finger too extensive leaching of the cement of the outside block ” the cement has been dissolved away by repeated water saturation”.

Atmosphere carbonation can lead to reduced porosity and possible disruption, leaching of soluble components can also lead to increased porosity and degradation of the cement matrix. Finally acceleration of this problem can be aided freeze thaw expansion /contraction when the product is saturated. A useful point to make is this problem came to light after the 2010 winter.

On a final note, there is more to Ireland than a 30 mile radius around Dublin and what might work in the Capital might not work else were. We took our eye of the ball on this one, slowly but surely the higher strength blocks are creeping in and the use of the appropriate render is being specified but its too little too late. The block may be the victim in this case but its handier to blame it and save a lot of red faces and this can be made easier if you have the state media at your disposal.

BRegs Blog note: For anyone affected by the above and looking for more information, please contact the Donegal Mica Action group at micaactiongroup@outlook.ie; see Facebook page Here

Property firm to contribute €1m to pyrite board | Irish Examiner

7 thoughts on “Crumbling Homes: is render the problem? | Seamus McDaid”