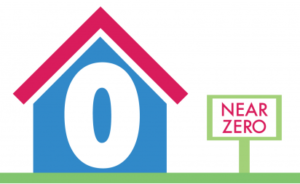 The following is part off an address by Mr. Damien English, T.D. Minister of State in the  Department of Housing, Planning, Community and Local Government at the Silken Park Industry Day on Wednesday, 22 February 2017.  The Minister outlines some of the latest steps being made in Ireland’s journey towards nZeb building. See link here. Minister English said:

“The Energy Performance of Buildings Directive has set ambitious building energy performance standards which we are working hard to ensure that we achieve… As you may be aware the Directive defines a Nearly Zero Energy Building or NZEB as a building that has a very high energy performance where the nearly zero or very low amount of energy required should be covered to a very significant extent by energy from renewable sources including energy from renewable sources produced on-site or nearby. This definition was inserted into the Building Regulations in January of this year through the Building Regulations (Amendment) Regulations 2017…

We are fully committed to meeting our obligations under the Energy Performance of Buildings Directive and intend that all new buildings will be Nearly Zero Energy Buildings by 31 December 2020 and that new buildings owned and occupied by public authorities will be nearly zero energy after the end of December 2018.”

Established house-builders Durkans have made the news with a scheme of first time buyer homes in Dublin built to the passive standard.   The view expressed by some sections of the industry, including previous Minister Alan Kelly, that more demanding building standards somehow inhibit construction activity by driving up costs, has no basis in fact.

Patrick Durkan, developer of the project,  says that the decision to go for such a high spec product in phase two, and a fully passive one in phase three, was market-led.  “The challenge was to work with our financial partners to build something that was really cost-effective but make it as efficient and attractive and saleable as possible…We don’t talk about eco or green or passive. Believe it or not, that’s just a by-product of what we’re marketing.”

RIAI ALERT: Problems Lodging a 7-Day Notice on the BCMS